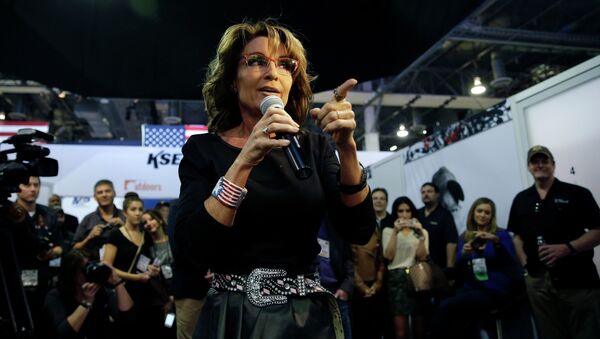 In a lengthy Facebook post, the 54-year-old former governor of Alaska stated that she had joined "a long list of American public personalities who have fallen victim to the evil, exploitative, sick ‘humor' of the British ‘comedian' Sacha Baron Cohen."

According to Palin, she'd agreed to the interview because she believed that it was going to be part of a documentary to honor American veterans.

"For my interview, my daughter and I were asked to travel across the country where Cohen (I presume) had heavily disguised himself as a disabled US Veteran, fake wheelchair and all," she explained. "Out of respect for what I was led to believe would be a thoughtful discussion with someone who had served in uniform, I sat through a long ‘interview' full of Hollywoodism's [sic] disrespect and sarcasm — but finally had enough and literally, physically removed my mic and walked out, much to Cohen's chagrin."

"The disrespect of our US military and middle-class Americans via Cohen's foreign commentaries under the guise of interview questions was perverse," she stressed.

But the former Alaska governor wasn't just going to air her complaints to "shallow Sacha boy:" she also offered a challenge to the comedian perhaps best known as Borat.

"The challenge is to Cohen, CBS and showtime: donate all the proceeds to a charitable group that actually respects and supports American Vets," she wrote. "Mock politicians and innocent public personalities all you want, if that lets you sleep at night, but HOW DARE YOU mock those who have fought and served our country."

After offering up her challenge, Palin went on to claim that the project's production team purposely dropped her and her daughter off at the wrong airport in Washington, DC, in an effort to make them miss their flight home.

"By the way, my daughter thinks you're a piece of ****, Sacha," she concluded. "Every honorable American vet should feel the same."

Though the details of the Showtime series are somewhat murky, one trailer released by Cohen this week showed former Vice President Dick Cheney sitting in a chair and signing a waterboarding kit.

The half-hour satirical show will premiere this Sunday, July 15 at 9 p.m. EDT.

Cohen is best known for portraying characters Ali G and Borat Sagdiyev, through whom he interviewed celebrities and politicians for his series "Da Ali G Show" and movie "Borat: Cultural Learnings of America for Make Benefit Glorious Nation of Kazakhstan," rarely letting them in on the joke. He previously interviewed Newt Gingrich, Pat Buchanan and US President Donald Trump for "Da Ali G Show" on HBO in the early 2000s.

000000
Popular comments
a political hack and a humourless comic 'performer'
michael
12 July 2018, 02:07 GMT
000000
Oh lighten up Mrs Palin. Laughter is good for your health. And you are also abusing veterans in the same way by pretending to glorify them because your angry at getting caught up in a stunt. Actually, it seems everyone is abusing vets and the military these days with all these fake wars.
Rokenbok
12 July 2018, 03:24 GMT
000000
Newsfeed
0
New firstOld first
loader
LIVE
Заголовок открываемого материала
Access to the chat has been blocked for violating the rules . You will be able to participate again through:∞. If you do not agree with the blocking, please use the feedback form
The discussion is closed. You can participate in the discussion within 24 hours after the publication of the article.
To participate in the discussion
log in or register
loader
Chats
Заголовок открываемого материала
Worldwide
InternationalEnglishEnglishMundoEspañolSpanish
Europe
DeutschlandDeutschGermanFranceFrançaisFrenchΕλλάδαΕλληνικάGreekItaliaItalianoItalianČeská republikaČeštinaCzechPolskaPolskiPolishСрбиjаСрпскиSerbianLatvijaLatviešuLatvianLietuvaLietuviųLithuanianMoldovaMoldoveneascăMoldavianБеларусьБеларускiBelarusian
Transcaucasia
ԱրմենիաՀայերենArmenianАҧсныАҧсышәалаAbkhazХуссар ИрыстонИронауОssetianსაქართველოქართულიGeorgianAzərbaycanАzərbaycancaAzerbaijani
Middle East
Sputnik عربيArabicArabicTürkiyeTürkçeTurkishSputnik ایرانPersianPersianSputnik افغانستانDariDari
Central Asia
ҚазақстанҚазақ тіліKazakhКыргызстанКыргызчаKyrgyzOʻzbekistonЎзбекчаUzbekТоҷикистонТоҷикӣTajik
East & Southeast Asia
Việt NamTiếng ViệtVietnamese日本日本語Japanese中国中文Chinese
South America
BrasilPortuguêsPortuguese
NewsfeedBreaking
15:01 GMTFBI Investigates Whether Long Island Blast Could be Linked to Terrorism
15:00 GMTRussian Startup Offers $200,000 for Right to Use Applicant's Face on Its Robot 'Forever'
14:59 GMTUK Spy Chief Urges Intel Services to 'Tap Into Global Tech' to Address 'Changing Nature of Threats'
14:52 GMTAlexander Lukashenko Says Poland-Belarus Refugee Crisis May be Resolved by Year-End
14:34 GMTSudan Denies Reports of Resumed Clashes at Border With Ethiopia
14:29 GMTFrance Needs Numerous Nuclear Reactors to Completely Re-Industrialize, Economy Minister Says
14:24 GMTIraqi Political Groups Reportedly Seek to Forge Bloc in Push to Drive US Forces From Country
14:22 GMTStoltenberg & Latvian Foreign Minister Deliver Remarks at NATO Foreign Ministers Meeting in Riga
14:20 GMTUS Revokes Terrorist Designation for Colombia's FARC
14:03 GMTWEF Says Will Continue to Prepare for Annual Meeting in Davos Despite Omicron Concerns
13:59 GMTIndian Opposition Demands That Bihar Chief Resign After Liquor Bottles Are Found in State Assembly
13:49 GMTTrump, 6 January Panel to Face Off in Federal Appeals Court Over White House Docs
13:37 GMTMinsk Ready to Deploy Russian Nuclear Weapons if NATO Systems Appear in Poland, Lukashenko Says
13:00 GMTPutin Undecided if He Will Run for President Again
12:49 GMTSudanese Police Use Tear Gas Against Demonstrators in Country's Capital - Photo, Video
12:39 GMTPETA Launches Fake Store Touting 'Human Leather Goods,' Slams Urban Outfitters
12:33 GMTResidents of Indian City Perform 'Pothole Worship' in Sign of Protest - Video
12:09 GMTUK Competition Regulator Orders Facebook to Sell GIF Sharing Platform Giphy
12:08 GMTCristiano Ronaldo Calls Ballon d'Or Chief ‘Liar’ For Claiming His ‘Ambition’ is to Outrival Messi
12:06 GMTRussia Will Soon Have New Hypersonic Missile With Maximum Speed of Mach 9, Putin Says