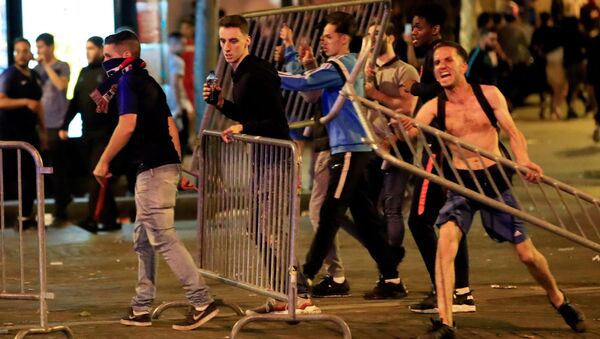 France's victory over neighboring Belgium in Tuesday's World Cup semifinal sent fans into a frenzy; in Paris and Brussels, many revelers responded to the game's outcome by clashing with local police.

France made it to the World Cup final for the first time in 12 years, and Les Bleus supporters were ecstatic in Paris. However, many fans responded to the national team's victory with disorderly conduct.

Thousands of people gathered on the Champs Elysees; some of them were throwing flares. Reports surfaced in the media that police had fired tear gas at the unruly supporters to disperse them.

Meanwhile, a mass brawl broke out among saddened fans in the Jette region in northwest Brussels late on Tuesday, according to RTBF, a local TV channel. A policewoman was hospitalized after being slightly injured during the incident.

The skirmish saw fans turn tables in local cafes upside down; when police arrived to cool down the heat, the crowd began throwing rocks at them.

Several people have reportedly been arrested; the number of those detained following Belgium's loss has yet to be specified.

On Tuesday, Samuel Umtiti's header off a corner kick sent France through to the World Cup final, where they will face either England or Croatia.