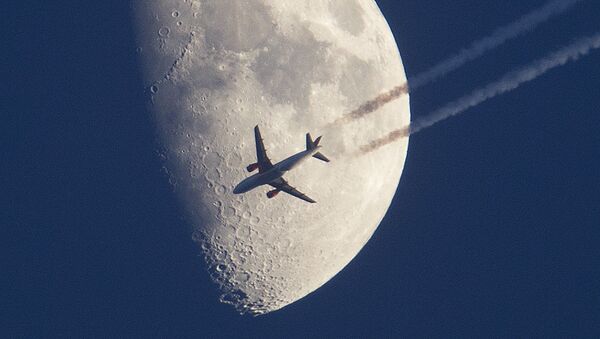 © AP Photo / Michael Probst
Subscribe
On Tuesday, Israel announced that it will launch an unmanned spacecraft for its first lunar mission in December 2018, which is expected to land on the moon two months later, on February 13, 2019.

If successful, Israel would become the fourth country to place an object on Earth's only natural satellite.

The spacecraft was developed by SpaceIL, an Israeli nonprofit working to promote scientific and technological education in the country and state-owned Israel Aerospace Industries (IAI) as part of their participation in Google's Lunar XPrize competition. The grand winner of the competition — the first privately-funded team to successfully place a spacecraft on the moon's surface and transmit high-definition video and images back to Earth — will be offered $20 million, once they complete all objects of the mission.

During a Tuesday media event at the IAI's space technology site in Yehud, Israel, the project managers announced that the $95 million spacecraft took eight years to build. The aircraft, which stands at about four feet high and is 6.5 feet in diameter, will reach a maximum speed of about 22,370 miles per hour. It also only weighs around 1,300 pounds, which would make it the smallest craft to make it to the moon, if it does so.

"We will put the Israeli flag on the moon," said Ido Anteby, chief executive officer of SpaceIL, during the news conference, the Jerusalem Post reported Wednesday.

"As soon as the spacecraft reaches the landing point it will be completely autonomous," Anteby said. "The motor will brake the craft and it will reach the ground at zero speed for a soft landing… during the landing, the craft will photograph the landing area with stills and video and even record itself," Anteby said.

The craft is to be launched from Cape Canaveral, Florida, aboard a SpaceX Falcon 9 rocket. It is expected to detach from the Falcon around 37,000 miles above Earth before it is seized by the moon's gravity.

The aircraft will travel at a speed 13 times faster than the maximum speed of an F-15 fighter jet and will traverse approximately 9 million kilometers during its two-day journey to the moon once it is disconnected from the Falcon, the project managers said. In addition to taking photos and videos of the landing site, a magnetometer on the spacecraft is expected to also measure the moon's magnetic field.

It's unclear what the spacecraft will be doing between its arrival in lunar orbit and the probe's landing on the surface.

Morris Khan, an Israeli billionaire and the president of SpaceIL, who donated $27 million to the project, expressed his excitement during the event Tuesday.

"This is a tremendous project. When the rocket is launched into space, we will all remember where we were when Israel landed on the moon," Khan said.

"The path to the moon is not easy. It is a very complicated route. The cooperation between SpaceIL and IAI is an example of the amazing abilities that can be reached in civil space activities — activities that combine education technology, industry, knowledge and a lot of initiative," Weiss added.

To date, only three countries have landed on the moon. Russia was the first to do so in February 1966 with their Luna 9 probe. During the same year, the US followed suit with Surveyor 1. The Chinese then landed the Chang'e 2 craft in 2013.

000000
Popular comments
Wow the rest of the world is really lame for not being on the moon already..... Especially the US
Tazo
12 July 2018, 01:54 GMT
000000
it will be interesting to see what they will find there with their packages - will it have been worth the trip?
michael
12 July 2018, 02:13 GMT
000000
Newsfeed
0
New firstOld first
loader
LIVE
Заголовок открываемого материала
Access to the chat has been blocked for violating the rules . You will be able to participate again through:∞. If you do not agree with the blocking, please use the feedback form
The discussion is closed. You can participate in the discussion within 24 hours after the publication of the article.
To participate in the discussion
log in or register
loader
Chats
Заголовок открываемого материала
Worldwide
InternationalEnglishEnglishMundoEspañolSpanish
Europe
DeutschlandDeutschGermanFranceFrançaisFrenchΕλλάδαΕλληνικάGreekItaliaItalianoItalianČeská republikaČeštinaCzechPolskaPolskiPolishСрбиjаСрпскиSerbianLatvijaLatviešuLatvianLietuvaLietuviųLithuanianMoldovaMoldoveneascăMoldavianБеларусьБеларускiBelarusian
Transcaucasia
ԱրմենիաՀայերենArmenianАҧсныАҧсышәалаAbkhazХуссар ИрыстонИронауОssetianსაქართველოქართულიGeorgianAzərbaycanАzərbaycancaAzerbaijani
Middle East
Sputnik عربيArabicArabicTürkiyeTürkçeTurkishSputnik ایرانPersianPersianSputnik افغانستانDariDari
Central Asia
ҚазақстанҚазақ тіліKazakhКыргызстанКыргызчаKyrgyzOʻzbekistonЎзбекчаUzbekТоҷикистонТоҷикӣTajik
East & Southeast Asia
Việt NamTiếng ViệtVietnamese日本日本語Japanese中国中文Chinese
South America
BrasilPortuguêsPortuguese
NewsfeedBreaking
19:46 GMTWHO: Data Insufficient to Conclude Omicron More Dangerous Than Delta
19:02 GMTUS Reportedly Sends Two Military Convoys to Syria Consisting of Over 100 Vehicles
18:24 GMTTaiwan Scrambles Jets to Fend Off 27 Chinese Military Aircraft
18:09 GMTBelarusian Security Council Says Kiev Stirring Up Migration Issue to Get Money From West
18:03 GMTPresident Ramaphosa Delivers Speech on South Africa's COVID Fight Amid Spread of Omicron Strain
17:52 GMTSouth African Doctor Says 'Mild' COVID-19 Variant Omicron Already 'Seeded' in UK
17:38 GMTPoll: Kamala Harris & Michelle Obama Dems' Top Choices for 2024 Race If Joe Biden Decides Not to Run
17:27 GMTHunter Biden Received 3-Carat Diamond on Top of $10M a Year Deal With Chinese Businessman, Book Says
17:17 GMTWill the Maxwell Trial Expose Epstein's Rich & Powerful Friends or Turn Into Another Cover-Up?
17:12 GMTSouth Africa's Health Minister Unhappy With International Reaction to Omicron Strain
16:32 GMTKremlin: Anti-Russian Campaign Could Be Used to Distract From Kiev’s Possible Military Op in Donbass
16:11 GMTGermany Warns US Congress Nord Stream 2 Sanctions Will 'Damage Transatlantic Unity', Docs Show
15:54 GMTPrince Harry Lashed Out at Prince William Who Asked Him Not to Rush Things With Meghan, Book Claims
15:45 GMTPoland Ready to Help Finance Return of Migrants Stuck at Border With Belarus to Home Countries
15:05 GMTTwo Iranian Seamen 'in Good Health' After Being Rescued by US Navy Ship in Gulf
14:51 GMTThe Omicron Strain: What is Known About New COVID-19 'Variant of Concern'
14:47 GMTAustrian Chancellor Speaks for Proceeding With Nord Stream 2 Pipeline Project
14:43 GMTKyrgyz Lawmaker Detained on Suspicion of Plotting a Coup - Source
14:19 GMTBiden's Attempt at Sending Message of Return to Normalcy Thwarted by New COVID Variant
14:00 GMTMacron Bashed for 'Throwing Toys Out of Pram' as Patel Uninvited to EU Talks on Channel Crossings