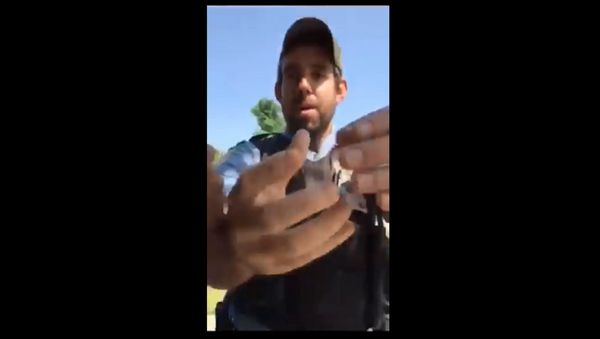 © Facebook / Tia Ewing
Subscribe
A viral video posted to Facebook of a Chicago police officer’s heated exchanges with two black men sparked an investigation into the cop’s actions by the Civilian Office of Police Accountability (COPA), the office said Monday.

The video was filmed by an African American man walking with his friend. As the video begins, an officer in an unmarked vehicle is pulled over on the side of the road. He tell the two African American men as they walk past that he "kill motherf*ckers." The man filming accuses the officer of trying to run him over.

According to a Friday press conference, the Chicago Police Department added "more than 1,500" officers to their regular patrol for the holiday on July 4, the day the video was shot. "These officers saturated neighborhood parks, downtown and lakefront areas."

"He was taunting them," Black Lives Matter Chicago organizer Aislinn Pulley told Sputnik News Wednesday. She said the officer was "trying to provoke a response that he could then arguably try to use as an excuse to demonstrate his power as a police officer over them by inflicting harm and abuse. That was clear."

​"Don't try to film me, dude. Alright? You want to do the bullsh*t, I'm gonna lock you up for walking in the street," the officer says in the video.

"I'm walking across the street," the man fires back. He was standing on the grass on the side of the road at that point.

The officer denies saying that he kills people and the men remind him that they have him on camera saying just that as the officer reverses his car. The officer then pulls over and exits the vehicle.

Despite the increased awareness of police brutality brought on by the Black Lives Matter movement, police are still murdering people, Pulley said. And this video lays bare that "they still continue to feel as if they have full reign and will face no accountability for harassing black youth. That continues."

As the episode continues, the men tell the officer they're on their way to the park and start walking. The officer stands between them, saying "we gonna play in the park."

"You want to know the good news, though? Illinois is a two-party consent state and I don't consent to you recording me," the officer says. However, according to state law, recording police officers in public is an entirely legal action.

Then the officer accuses the man of kicking his shoes as he walked with the men. "You just hit my shoe, bro. Watch out."

"Had they not had the camera there, recording the interaction, it could have gone very differently, and because the footage cuts out at the end it's really uncertain whether or not it did escalate afterwards," Pulley said. She added that the officer's emphasis on his shoes being touched was just more taunting intended to provoke the men.

​The man filming says that his mother's boyfriend is a sergeant. "Call him!" the officer yells repeatedly.

Then, he notices that the officer is not wearing a name badge. "You don't even got your name tag," he says. The officer then gives his last name and badge number and calls the man a "retard." He tries to grab the man's phone to show him his badge, which just has his number.

"You touching my phone, whatchu doing?" the man asks. The video then ends abruptly.

Plain and simple, the officers stopped the two men because of "racism," Pulley said. "Particularly, working class black people in Chicago are accustomed to harassment anywhere they are by police; be it a park, a sidewalk, school — anywhere."

"This kind of behavior is not what is expected of Department members and is in contrast to the hard work we have done and continue to do to rebuild trust with the communities we serve," the department said in a statement, according to NBC on Wednesday.

High-profile killings by police of black men and teenagers in Chicago, such as that of Laquan McDonald in 2014 and Maurice Granton and Quintonio LeGreir more recently, force Chicagoans to "absolutely" take the officer's statement about killing people seriously, Pulley said.

In Chicago, police are "ever-present," Pulley said. Chicago is second only to Washington DC in terms of police officers per capita in major metropolitan areas, however DC is home to more tha two dozen different agencies, many of which are federal. "So police are everywhere, and they are always present whenever there is a demonstration or a protest or an action. So their mere presence is used to elicit intimidation," Pulley said.

Every five days in Chicago, a police officer fires a gun at somebody. About four out of every five people shot by police are African American males, according to data analysis from the Chicago Tribune.

Chicago's mayor, Rahm Emanuel, former chief of staff for former US President Barack Obama, has done nothing to ease tensions between police and the black community there. Currently, the Democratic politician is pushing for the construction of a new police academy at a cost of $95 million dollars to taxpayers amid fierce backlash from activists demanding the money be allocated to education instead.

"If you look just purely based on statistical data, on facts, there's absolutely no reason why to assume or believe that somehow the Democrats are more favorable to fighting police brutality," Pulley said. Chicago is a "well-known Democrat stronghold. Chicago is where we have Homan Square, a police black site where police have disappeared over 7,000 citizens. Where [Black Panther] Chairman Fred Hampton and Deputy Mark Clark were murdered [in 1969] in a conspiracy between the FBI and [the Chicago Police Department]. This is where Laquan McDonald was murdered, shot 16 times and where the mayor colluded in covering up the footage so that he could win re-election," Pulley said.

Both the Republican and Democratic parties are "complicit," Pulley stressed. "Both of their hands are bloody."

000000
Popular comments
Chicago is a lost cause. Let it burn.

dee_snutz
12 July 2018, 00:35 GMT
000000
Just another day in the fascist police state of the United States where "Liberty and Freedom is for all". The American people must come to the conclusion that the police and the political class has ripped up the Constitution and replaced with a totalitarian creed of racism and thuggery. In the face of this unconstitutionality the people have the right under the constitution to form self defense militias to rid themselves of this constant assault on the people by governmental thugs.
hopscotch64
12 July 2018, 01:30 GMT
000000
Newsfeed
0
New firstOld first
loader
LIVE
Заголовок открываемого материала
Access to the chat has been blocked for violating the rules . You will be able to participate again through:∞. If you do not agree with the blocking, please use the feedback form
The discussion is closed. You can participate in the discussion within 24 hours after the publication of the article.
To participate in the discussion
log in or register
loader
Chats
Заголовок открываемого материала
Worldwide
InternationalEnglishEnglishMundoEspañolSpanish
Europe
DeutschlandDeutschGermanFranceFrançaisFrenchΕλλάδαΕλληνικάGreekItaliaItalianoItalianČeská republikaČeštinaCzechPolskaPolskiPolishСрбиjаСрпскиSerbianLatvijaLatviešuLatvianLietuvaLietuviųLithuanianMoldovaMoldoveneascăMoldavianБеларусьБеларускiBelarusian
Transcaucasia
ԱրմենիաՀայերենArmenianАҧсныАҧсышәалаAbkhazХуссар ИрыстонИронауОssetianსაქართველოქართულიGeorgianAzərbaycanАzərbaycancaAzerbaijani
Middle East
Sputnik عربيArabicArabicTürkiyeTürkçeTurkishSputnik ایرانPersianPersianSputnik افغانستانDariDari
Central Asia
ҚазақстанҚазақ тіліKazakhКыргызстанКыргызчаKyrgyzOʻzbekistonЎзбекчаUzbekТоҷикистонТоҷикӣTajik
East & Southeast Asia
Việt NamTiếng ViệtVietnamese日本日本語Japanese中国中文Chinese
South America
BrasilPortuguêsPortuguese
NewsfeedBreaking
07:48 GMTFSB Detains Three Ukrainian Special Agents Who Planned to Blow Up Black Sea Fleet Radio Center Mast
07:46 GMTTop US, Chinese Military Officials to Meet Amid Taiwan Tensions, Reports Say
07:39 GMTThree Arrested as Bomb Found Near US Ambassador's Residence in Icelandic Capital
07:13 GMTKamala Harris' Chief Spokesperson to Leave Office, Reports Say
06:38 GMTBoJo Under Pressure as New Allegations Arise Amid 'Boozy Party at Downing Street' Reports
06:34 GMTBelarusian President Lukashenko Says Not Going to Leave Big Politics
04:08 GMTChina Summons Japanese Ambassador Over Shinzo Abe's 'Erroneous' Taiwan Comments
03:59 GMT'It's Embarrassing': Chris Cuomo Breaks Silence After Indefinite Suspension From CNN
03:56 GMTWill Ralf Rangnick Bring an End to Ronaldo's Days at Manchester United?
02:15 GMTLukashenko Speaks on Migrant Crisis, Ukraine and Explains Why Belarus Needs S-400s
02:15 GMTCurrent Myanmar, Afghanistan Envoys to UN to Keep Posts For Now - Russian Envoy
01:51 GMTUS-UK Talks on Steel Tariffs Removal Stalled Over Northern Ireland Clause - Reports
01:30 GMTEthiopian Army Recaptures Historic Lalibela, Eight Other Towns in Counteroffensive Against TPLF
01:10 GMT'Something Will Happen': Trump Suggests China Will Strike Taiwan After 2022 Beijing Olympics
00:26 GMTJan. 6 Panel Unanimously Votes to Hold Trump-Era DoJ Official Jeffrey Clark in Contempt of Congress
YesterdayTrump May Reportedly Self-Publish Memoir Over Fears of Lowball Advance by Top Publishing Firms
YesterdayHigher US Business Costs Pressure Led to Upped Inflation in November - Federal Reserve
YesterdayMeta Removes Accounts in Belarus, China, Poland for 'Inauthentic Behavior' – Official
YesterdayTurkish Finance Minister Elvan Resigns Amid Record Drop in Value of Lira
YesterdayDPRK’s New Nukes & Missiles Force US, South Korea to Rethink War Plans - Report