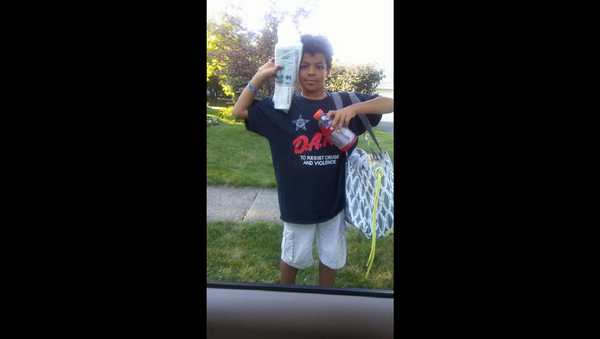 © Facebook / Bmai Love
Subscribe
Social media is up in arms after police were called on an 11-year-old boy delivering newspapers in Columbus, Ohio – only the latest case in a slew of viral incidents in which police have been called on African Americans simply going about their daily lives.

On Friday, Brandie Sharp posted about the interaction she and her son, Uriah, had with police in the upper-class Columbus neighborhood of Upper Arlington. She had encouraged her son to take on a paper route to raise some extra money for his hobbies, she told Sputnik News on Wednesday.

"He's going to doorsteps, I'm driving like two miles an hour down the street to make sure he knows what to do — he's excited!" she said of her son's first day on the job.

She discovered that they had mistakenly delivered to a few houses, so she sent Uriah running back to pick up a couple of the papers he'd dropped on the wrong porches.

"I could tell people were outside whispering, like 'Who are these people, we've never seen them in the neighborhood,'" she recalled. "I could tell the police were following us by then… my son was like, 'Mom, I think they're following us.' I said 'Don't worry about it, we're just delivering papers.'"

"We dispatched two officers, which is common for us in situations like this where there's a suspicious person or suspicious activity that we're looking into," Upper Arlington Police Division spokesman officer Bryan McKean told Sputnik News Wednesday.

"Our first officer got on scene [and] very quickly determined that there was not a theft that was taking place," he said.

Per Sharp's account, an officer rolled up to them to ask what they were doing. "I was like, 'I'm reading my book?' I didn't know how to answer. He said, 'Are you guys soliciting?' And I said, 'No, sir, my son's delivering papers.' And he said, 'Oh really?'"

The officer smirked, Sharp told Sputnik News, did something on his dash computer and took off. "I was like, ‘that was awkward,'" Sharp said.

Sharp said the officer she spoke to wasn't particularly polite, perhaps a bit snarky, but stressed that she is not so much angry with the police as she is upset with the person who called them.

The situation was too uncomfortable for Sharp and her son to continue their paper-delivering mission, so they left.

After she posted about the experience on Facebook, a chorus of others chimed in to share their similar experiences in the neighborhood. Eventually, Sharp came across the police report.

"It looked like at first maybe they were, like delivering newspapers or something, but then I noticed they were walking up to the houses with nothing in hand and one of them came back with something," a woman can be heard saying in the 911 call obtained by NBC.

"This is when I got really upset," Sharp told Sputnik News. "They profiled my 11-year-old son. They said they were threatened by him and they felt suspicious activity was going on. What's suspicious about him? He went to pick the newspaper up and came right back. I watched him. So what were you so threatened by?"

She said she didn't want to believe the call was racially motivated, "but what else could it have been?" she wondered. Sharp said that if she had been the caller, "I would have stuck my head out the window or my door and say 'I'm sorry, are you looking for someone or do you need something?' But if you thought something was threatening, you kinda watch that person and then make a decision. But to make a decision like that out of impulse was a little harsh. Especially when it's an 11-year-old boy who's done nothing wrong."

From McKean's point of view, "as far as being targeted, I'm not necessarily sure that that's what happened in this case. I think that when you look at, when you just isolate this behavior specifically, and you say, ‘Oh, someone is going up to a porch without an item and returning with an item, I think everyone would agree that that behavior is suspicious," he said. "So we would want any citizen to call us if they think that a theft is occurring, and we would respond to that."

"I'm not really sure that, you know, that targeting is what occured in this particular case," McKean told Sputnik News.

"I have never been treated like that," Sharp says.

Sharp told Sputnik she has lived her entire life in Ohio, mostly in white neighborhoods, and attended majority white schools. "They treated me great." Her family are well-respected members of the community, too: her grandfather was the first African American highway patrolman in Ohio, known nationally, and served the town of Urbancrest as its mayor.

Her son was left confused by the situation, and unhappy at being stopped by the police. "He gets it, but he doesn't get it," Sharp told Sputnik News.

"So then I have to explain to him, 'It could have been because you're a different color, Uriah,' and he goes, 'They don't like me because I'm black?'"

"It's a very hard conversation," Sharp said. "It almost chokes you up, because you don't want to have to tell them this is reality of some of the world."

McKean emphasized that the Upper Arlington Police Division is "internationally accredited," has a "very good community outreach program," and trains officers on cultural diversity among other things. He said he doesn't think "that there's anything that we're looking at doing in response to this," however.

The boy's main concern was whether he was going back to deliver the rest of his papers. "Absolutely not," said his mother.

She says nobody from the police department has reached out to her over the incident. "Not even an apology, no nothing."

Pressed on whether he thinks the department should apologize to Sharp, McKean simply reiterated that the department will always send officers to respond to reports of possible theft.

Sharp thinks police should listen to both sides of this incident, and feels her story has been ignored while the woman who called 911 was heard. Nonetheless, she says she's not mad at the call, but thinks whoever picked up the phone could have handled the situation "a lot better."