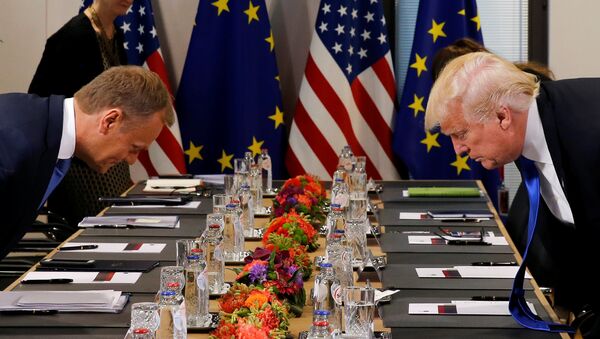 Rick Rozoff: Mr. Tusk is a Euroatlanticist individual…He's not so much concerned about Europe as he is about the Atlanticist connection between the United States and Europe. [The same is true of] certain of his colleagues, like Radoslaw Sikorski and his American wife journalist [Anne Applebaum], and so forth. So we have to take with a grain of salt who these people are. These are Brusselscrats.

EU's Tusk to Trump: 'Please Respect Your Allies, You Don't Have That Many'
The European Union may not be in existence for long given recent trends and national elections in Europe. So for the United States or any other country or region in the world for that matter to place too much emphasis on the European Union as a trade partner I think is at best misguided.

However, I think what Tusk is alluding to, being a Pole, [whose country borders] Russia, at least the Kaliningrad district, is pushing for continued or expanded American military presence in Eastern Europe and along the Russian border.

Sputnik: Some experts fear that NATO may be weakened or even crack completely amid a weakened US presence in the bloc. How justified are such concerns from your point of view?

Rick Rozoff: I think it's overly optimistic. What President Trump is doing, quite in keeping with his general protectionist approach to economics, trade and other realms, as far as I can tell and on face value, is simply insisting that other NATO partners pay the requisite 2% of gross domestic product for military purposes. I don't see that as weakening the alliance. It may actually add to the collective budget of NATO. We have keep in mind that NATO countries collectively, with the US taking the lion's share of it of course, spend over a trillion dollars a year on their respective militaries.

Pricey Alliance: How Trump is Nailing European NATO Members to the Wall
To push that yet further, when there's no threat to Europe on the European continent, at least by state actors, is again simply emphasizing the aggressive and reckless approach by the Atlanticists stirring up conflict with Russia.

There's clearly no other objective for building up US and NATO military forces in Eastern Europe but to contain and perhaps, as harsh as it sounds, to confront Russia militarily.

Sputnik: What's your overall expectation on the upcoming NATO summit?

Rick Rozoff: I think there's nervousness in the sense that this is reminiscent of the Bush years, where certain NATO allies – I think more as a question of style than substance…[sought] to distance themselves from the US president. I think the same situation pertains pretty much to President Trump. Keep in mind that Angela Merkel and her Christian Democratic Union are at least nominally politically conservative, with economic and political views very close to those of Donald Trump.

Troop Withdrawal From Germany Would Weaken US Global Posture – Brookings Fellow
Sputnik: What are you hopes for the Trump-Putin meeting, considering how poor relations between the two countries are at the moment? What are the chances of warming relations, or any concrete agreements?

Rick Rozoff: The fact that the meeting is occurring at all is perhaps more than we can expect. I have to emphasize in the strongest possible sense that any of your listeners outside of the United States most likely have absolutely no idea how vicious and virulent the Russophobia [has become] over the last two years. It's completely gratuitous; it's without any foundation in fact, but nevertheless has been taken to a fever pitch.

I'm somebody who's lived through the entire Cold War. I have an ethnic Russian surname, so I know what Russophobia is. But what I've seen over the last two years outstrips anything I can remember even during say the Reagan period. It's a constant bombardment of anti-Russian sentiment that's truly grotesque. The fact that our media is indulging in this –it's fairly typical of what we're inundated with day in and day out. I think it's very dangerous, and something that not only the Russian foreign ministry needs to address in some manner, but perhaps even an issue which should be taken up in bodies like the United Nations.

Rick Rozoff is an investigative journalist, blogger and anti-war activist, and the manager of Stop NATO International. The views expressed by Mr. Rozoff are those of the speaker, and do not necessarily reflect those of Sputnik.

000000
Popular comments
Do these europeans want peace or they are all warmongers like the Americans?