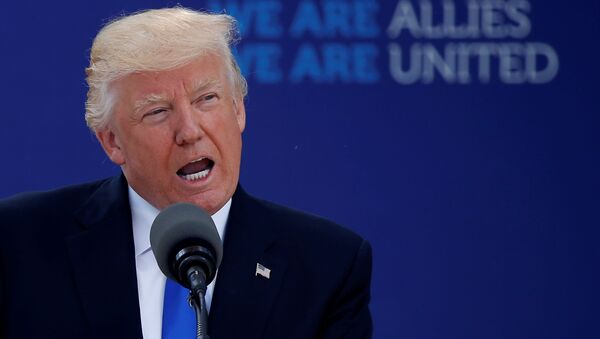 © REUTERS / Jonathan Ernst
Subscribe
International
India
Africa
WASHINGTON (Sputnik) - NATO member nations that have not met their 2 percent of Gross Domestic Product (GDP) defense budget obligations for many years should reimburse the United States for them, President Donald Trump suggested in a Twitter message on Tuesday.

"Many countries in NATO, which we are expected to defend, are not only short of their current commitment of 2 percent (which is low), but are also delinquent for many years in payments that have not been made. Will they reimburse the US?" Trump asked in his tweet.

Pricey Alliance: How Trump is Nailing European NATO Members to the Wall
Trump made his suggestion while preparing to attend the summit meeting of NATO leaders that begins at the alliance headquarters in Brussels on Wednesday.

Trump has repeatedly pressed the other member governments of NATO to meet their annual defense spending obligations in the alliance but since he took office in January 2017 only 14 percent of them have done so.

Just four NATO member states met the stated goal of spending 2 percent or more of their GDP on defense in 2017, with the remaining 24 members falling short, according to a report by the Pew Research Center on Monday.