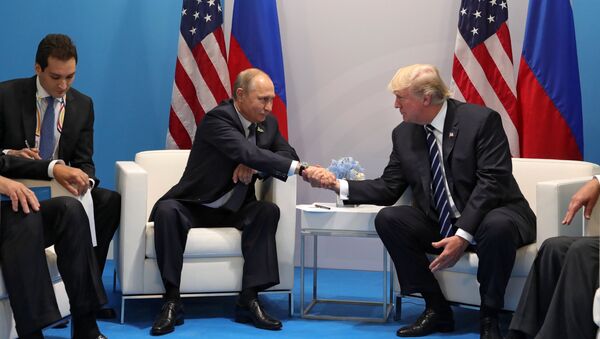 MOSCOW (Sputnik) - Russian President Vladimir Putin and US leader Donald Trump could use their upcoming meeting in Helsinki to reaffirm their commitment to avoid nuclear escalation and discuss specific steps to lower risks in this area, three former European diplomats and a former US senator said Tuesday in an open letter ahead of the summit.

"The reality today is that we have entered a new era, in which a fateful error—triggered by an accident, miscalculation, or blunder—could trigger a nuclear catastrophe… The Trump-Putin summit is an opportunity to stop this dangerous drift. Reaffirming that a nuclear war cannot be won and must never be fought, the United States and Russia could agree to specific steps at Helsinki to reduce nuclear risks," the letter read.

The tensions between Russia and NATO only heighten the risks of such a misstep, according to the letter.

The four authors suggested launching discussions about increasing the amount of time the US and Russian leaders have to decide on a course of action with regard to possible nuclear attacks from minutes to hours — or even days. By doing so, fatal mistakes can be avoided, and security in Europe and the United States can be ensured.

"A clear directive by the two presidents to their military leaders to work to develop options to achieve this goal would be a powerful signal to the American people, to the Russian people and to the world," the letter read.

Secondly, Putin and Trump are advised to launch talks on "reducing and managing cyber nuclear risks," to ensure that strategic nuclear facilities cannot be hacked.

READ MORE: 'I Am Totally Prepared': Trump Expects to Have a Good Meeting With Putin

Finally, the open letter proposed to continue talks on "practical arrangements for the full and expeditious implementation of the commitments in the Singapore Summit Joint Statement."

Putin and Trump will meet in the Finnish capital on Monday.