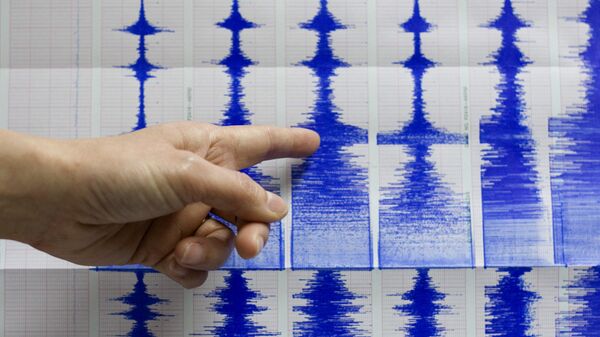 © AP Photo
Subscribe
International
India
Africa
In response to a series of minor earthquakes felt across northern Israel over the past few days, Israeli Prime Minister Benjamin Netanyahu stated Monday that preparations were underway to reinforce the country’s infrastructure.

According to news site Arutz Sheva, Netanyahu told government officials during a cabinet meeting this week that earthquake preparedness measures are currently being examined and any necessary actions would be undertaken over the next couple years.

"There are also other threats in the north, threats from nature: earthquakes," Netanyahu told his ministers. "We are preparing together with the Minister of Finance and the Minister of Defense. On the question of the earthquakes, an important act has already been made with National Outline Plan 38, but, of course, there is a need for additional steps and it costs a lot of money."

"It should be spread over a period of years, but it will be brought to the cabinet in the coming days."

National Outline Plan 38 is an Israeli measure to strengthen older buildings against earthquakes. The measure also offers economic incentives to encourage residents to seek building permits that will allow them to reinforce their homes.

The prime minister's remarks came the same day that Jackie Levy, Israel's deputy minister of housing and construction, told The Jerusalem Post that roughly 80,000 homes in the state are in danger of toppling if a powerful earthquake hits.

"There are many old structures that will simply collapse like a tower of cards during an earthquake," Levy told the publication. "On every platform, I have demanded that the Israeli government open its eyes and internalize that this earthquake is a ticking time bomb, and it must invest considerable resources in order to prevent the disaster."

"The government must stop trembling from the large expenditure and ascend one step after another on the budget ladder, because the quakes are going up the Richter scale at a dizzying pace," he added.

Suggesting that the recent series of earthquakes was likely leading up to "the big one," Levy stressed that "this is Israel's biggest security threat."

But not everyone agrees with Levy's predictions. Avi Shapira, a seismologist at Haifa University, told Ynet News that the series of earthquakes doesn't necessarily suggest that a major shaker was around the corner.

"There is no clear evidence suggesting that such a sequence of earthquakes necessarily leads to a massive earthquake," Shapira said. "Statistically speaking, there are places around the world where probability increases. Chances are nothing will happen, but you cannot rule out the possibility that it might."

Israel is situated along the Syrian-African rift, which is part of the Great Rift Valley, a geographic trench that runs from Lebanon's Beqaa Valley southward to Mozambique.

The most recent earthquake felt in the country was Monday evening. It measured in at a magnitude of 3.2. The last major earthquake to hit the region was in 1927, killing at least 300 people and injuring 700 others, CBN News reported. Its magnitude was estimated to be 6.2.