Forget the Fireworks! Fireball Puts on Show for Several US States (VIDEOS) 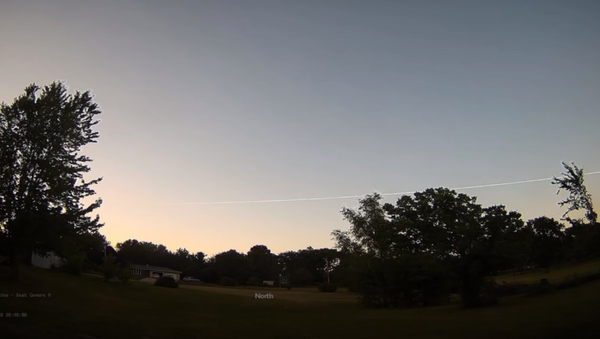 Four days after thousands of fireworks lit up the night across the US, residents living in the country’s Midwest were given yet another light show when a fireball made a surprise appearance Sunday.

According to the American Meteor Society (AMS), nearly 600 sightings of the fireball event have been reported by residents of Illinois, Iowa, Michigan, Minnesota, Indiana, Kansas, Nebraska, Ohio and Wisconsin.

​"The estimated 3D trajectory computed from the witness reports shows an [sic] shallow angle, one that could be associated with an Earth grazing fireball," AMS said in an online post. "But many witnesses reported a fragmentation — it could mean the meteoroid actually went through the Earth atmosphere."

Though residents over nine US states reported seeing the fireball, AMS noted that the majority of sightings took place over Iowa and western Illinois.

​Reports on AMS' site describe the fireball as having a bright green color with a trail of gold and only lasting some 10 to 15 seconds before disappearing.

"The fireball was slow moving, going north to south, and it was a beautiful greenish-blue on the outside and bright white near the center," John Collier posted on AMS' site. "It covered the entire span from one side of my front windshield to the other (guesstimate, a 60 degree span)."

"It had a tail that was approximately 5 degrees long. The fireball itself was maybe 5 degrees above the horizon. Just before it winked out, it looked like it broke up into several smaller pieces," he added.

This incident comes after a motorist driving on a Colorado highway managed to capture the moment that a fireball appeared across the Centennial State's skies.