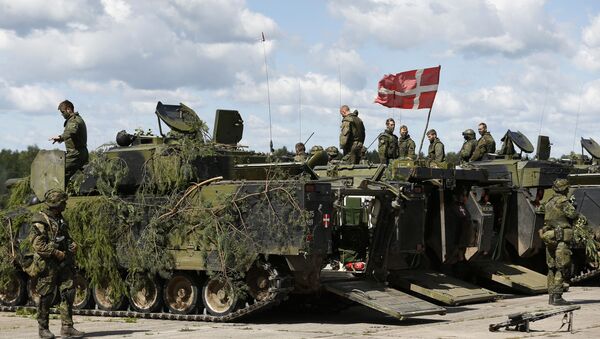 A new ad by the Danish military enumerating its contribution to NATO is being touted as a "response to US President Donald Trump," who has slammed the Scandinavian country for failing to live up to NATO's target spending of 2 percent of GDP.

The brand new video commercial from the Danish Defense reviews Denmark's contribution to NATO to the roar of fighter jets in the sky over the Baltic Sea. The video was launched ahead of this week's NATO Summit in Brussels, and its stated goal is to remind Denmark's allies that despite repeated criticism from US President Donald Trump, the Scandinavian country does a lot for NATO.

According to Danish Defense Minister Claus Hjort Frederiksen, the video is a greeting to Donald Trump, who previously lambasted Denmark for its low level of defense expenditure.

"It's a response to Trump. Even though we do not pay two percent and do not reach the two percent level, we still deliver a very significant contribution to the common defense," Claus Hjort Frederiksen told Danish Radio, adding that the goal was to show that Denmark is really good in making the most of the kronor it invests in defense.

Last week, Danish Prime Minister Lars Løkke Rasmussen received a letter from Trump urging him to up Denmark's military budget from the current level of 1.3 percent of GDP to at least 2 percent.

"Of course, we understand the American view that it is not fair that US taxpayers are to bear the burden of the European defense. On the other hand, we would also like to have a discussion about exact items and operations bought and carried out for the defense kronor invested. Denmark has nothing to be ashamed of; quite the contrary," Claus Hjort Frederiksen said.

With the new defense agreement in place until 2023, Danish defense will receive an extra DKK 4.8 billion ($760 million). At the same time, Denmark uses 20 percent of the defense budget on new equipment, which is another key requirement in NATO.

"You always have to take care of yourself, and I'm quite sure that Danish defense is among of the most effective in Europe. Both in terms of quality and quantity in relation to our size. This is commendable," Danish defense chief General Bjørn Bisserup said, admitting that he would never say "no" to more defense allocations.

Defense Minister Claus Hjort Frederiksen said the video was aimed at anyone interested, but expressed hope that many Americans watch it, including the US leader himself.

"Now we're putting it on our website, so that interested people can see it, and so I hope the US Embassy will forward it," Claus Hjort Frederiksen concluded.

The NATO Summit in Brussels will take place on Wednesday and Thursday this week.