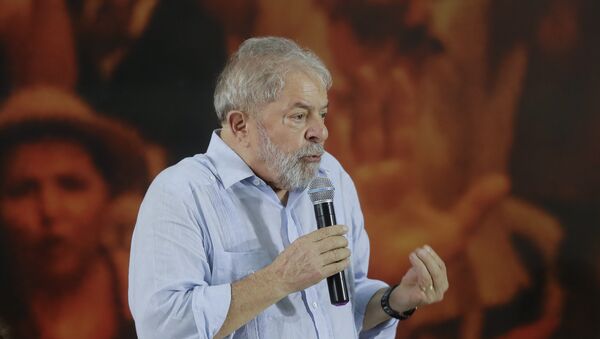 The head-spinning saga began on Sunday when appellate Judge Rogério Favreto ruled that the popular leftist politician, who has been serving a 12-year prison sentence for corruption since April, be freed. The order was later blocked by Judge Sergio Moro, the same judge who sentence Lula to prison in the first place.

Moro wasn't the only legal official to step into the legal battlefield, though. Judge Pedro Gebran Neto, the chief appellate judge overseeing Lula's case, jumped in and ordered Lula to remain in prison and instructed federal police to disregard Favreto's ruling.

Lula served as the President of Brazil from 2003 to 2011, but was convicted in July 2017 of corruption and money-laundering for accepting a seaside apartment that was remodeled to his liking.

​Piva told Radio Sputnik's Loud & Clear on Monday that the weekend events highlighted that the issue was no longer whether Lula was guilty of his crimes, but that the judicial system was trying to squash his attempt at running for president again.

Despite the conviction and subsequent jailing, Lula accepted the Workers' Party's nomination as its presidential candidate in January, mere hours after the Brazilian appeals court raised his jail sentence from nine-and-a-half years to 12 years, Bloomberg reported.

According to Al Jazeera, Brazil's electoral court will decide if Lula can join the election in August.

"There's a lot of controversy on whether Lula is guilty or should be released and run for the president, but yesterday it made everything really clear: we have a judicial system that's actively working to keep him in jail and prevent him from running," Piva told show hosts Brian Becker and John Kiriakou.

"It's not about whether he's a guilty or not, it's about keeping him out of the presidential race."

Noting that Lula and ousted Brazilian President Dilma Rousseff both had ties to Brazil's Workers' Party, Piva told Becker, "there's a corruption team that we need to be very aware of."

"It seems to be the new war on terrorism, but in Latin America it's the war on corruption that's leading to all kinds of illegalities," the journalist said. "So, we now see, for example, funds that were supposed to go to education [and] health care are now being funneled to things like the military intervention in Rio."

When asked about the persecution of Lula and of former Ecuadorean President Rafael Correa, Piva stressed that the legal attacks were part of a growing trend in Latin America.

"In… Latin America and many places like Argentina, Ecuador and Brazil… politics is now being decided not by the people, but by the judicial system… it's a new imperialistic offensive against progressive governments in the region," she concluded.

An arrest warrant was recently issued by Ecuador against Correa over his alleged involvement in a kidnapping case from 2012. Correa has shot down the allegations, telling AFP that the claims are part of a "plot" by the Ecuadorean government.