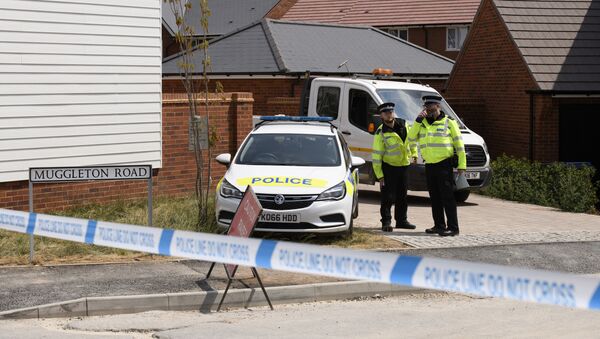 On Sunday, the UK Metropolitan Police said that a woman, identified as Dawn Sturgess, had died in a local hospital after being exposed to a toxic substance in Amesbury. Police have launched a murder inquiry.

Kremlin spokesman Dmitry Peskov commented on the death of one of the Amesbury victims, saying that the poisoning poses a threat not only to Britons, but to all Europeans.

Peskov added that "the nature of the incident [in Amesbury] causes concern" and "poses a great danger."

Victims of UK's Wiltshire Alleged Poisoning Incident Remain Critical - Police
The Kremlin regrets the death of the victim of the incident in Amesbury and is deeply concerned about this state of emergency. This second consecutive incident of poisoning in the UK poses a threat not only to the British, but also to all Europeans, Dmitry Peskov told reporters.

"We, of course, deeply regret the demise of the UK citizen, and we remain extremely concerned about the continuing incidents with toxic substances on the territory of the United Kingdom. We believe that this poses a danger not only to UK citizens, but to all other Europeans," Peskov told reporters.

Russia suspects that Skripals are either forcibly isolated by London, or their condition is not that is being presented in official reports, Russian Foreign Ministry spokeswoman Maria Zakharova said on Monday.

At a parliament session on Thursday, UK Home Secretary Sajid Javid said that the United Kingdom would take "further action" should Russia's involvement in the incident be confirmed. He noted, however, that "we don't want to jump to conclusions."

On Thursday, UK police announced that a couple, Dawn Sturgess and Charlie Rowley, was believed to have handled an item allegedly contaminated with the same military-grade Novichok nerve agent which was reportedly used in the attack on the Skripals in the UK city of Salisbury, located several miles from Amesbury.