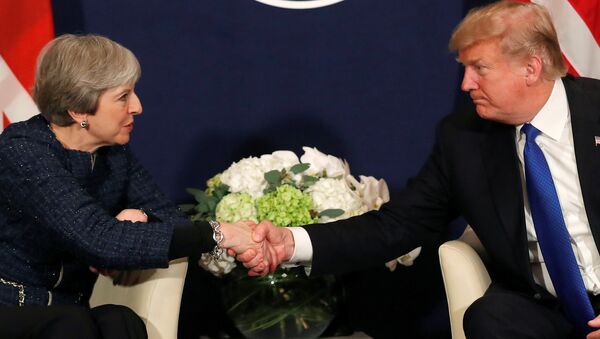 Ahead of Donald Trump's official two-day visit to the United Kingdom, the media and pundits have been speculating about how the POTUS will react to demonstrations that will take place in London.

After reports surfaced that thousands of people would be protesting Donald Trump's visit to the UK, Lance Price, Tony Blair's former media adviser, told The Independent that the  "unpredictable" US president may want to face the protesters himself.

"I can't see him wanting to skulk away, to hide away and be seen to be avoiding the challenge the protesters are putting up to him. He doesn't respond in a conventional fashion to anything, so why would he this time?"

Mr. Price suggested that Donald Trump would mostly fly around in a helicopter or be driven in a presidential car nicknamed "The Beast."

Lance Price believes that the president will definitely be aware of the anti-Trump rallies, calling him a "television addict."

He said that Trump is likely to be on his best behavior when he joins Queen Elizabeth at Windsor. Mr. Price says that top UK officials, including the queen and Prime Minister May, would be advised to be "ultra-cautious" and tolerate the visit with a "minimum of diplomatic disasters."

Commenting on the upcoming visit later in the day, White House spokeswoman Sarah Huckabee Sanders stated that US President Donald Trump continues to prepare for his working visit to the United Kingdom despite the split in the British cabinet and the resignation of Foreign Secretary Boris Johnson.

"The President continues to look forward to his working visit with the Prime Minister [Theresa May] on July 13, and further strengthening the US-UK special relationship," Sanders said.

Earlier on Monday, Johnson announced his decision to leave the Foreign Secretary post less than a day after the departure of Brexit Minister David Davis. Davis resigned on Sunday citing disagreement with May's plan for exiting the European Union as the reason for stepping down.

Mass anti-Trump rallies are expected to bring together about 50,000 people in central London when the US president kicks off his first official visit to the UK this week since taking office. The US president will reportedly try to avoid London to avoid embarrassment as anti-Trump campaigners also plan to launch a huge inflatable balloon of "baby Trump" into the sky above the capital.