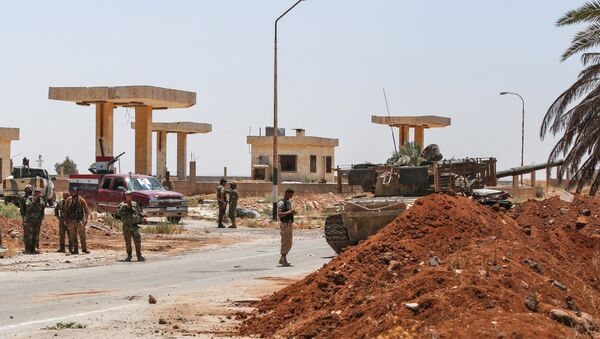 On July 6, the Syrian Army announced that it had liberated the Nassib crossing point from terrorists as a result of the army's offensive in the country's southwestern province of Daraa.

The Syrian Arab News Agency (SANA) has published a video of government troops finding weapons and military equipment left behind by terrorists at the Nassib crossing point on the Jordanian border in the province of Daraa.

The footage shows what looks like a terrorist depot with ammunition boxes as well as an abandoned armored personnel carrier and other military hardware outside.

The video was released a few days after the head of the information center of the joint operations command of the opposition in the south of Syria Abu Shima told Sputnik that the leaders of armed groups in Daraa had clinched an agreement  with representatives of Russia "on the immediate cessation of hostilities" in the province.

According to the Russian Defense Ministry, the parties have also agreed on the regularization of the militants' status and the evacuation of militants who do not wish to regularize their status, as well as their family members, to the province of Idlib.

Additionally, the parties agreed on the resumption of work by the Syrian government bodies on territories controlled by armed groups, and the return of Syrian refugees from the border with Jordan to their homes.

Late last week, the Syrian Army announced the liberation of the Nassib border crossing near the Jordan border amid reports that government forces had found three tanks, two air defense guns, as well as 40 anti-tank missiles, rocket launchers, a number of small arms and 1,500 ammunition boxes in the city of Izra in Daraa.

At Least 2 Killed, Over 10 Injured as Militants Shell Syria's Daraa – Reports
Earlier, the Syrian army launched an offensive in Daraa province after its capital and several other cities were shelled by local militants despite an ongoing ceasefire reached with the help of the Russian Reconciliation Center for Syria.  As a result, thousands of Syrians have fled to neighboring Jordan in a bid to find shelter.

Syria has been in a state of civil war since 2011, with government forces fighting against numerous opposition groups and terrorist organizations, such as Daesh* and al-Nusra Front*.

*Daesh, al-Nusra, terrorist groups banned in Russia and an array of other countries