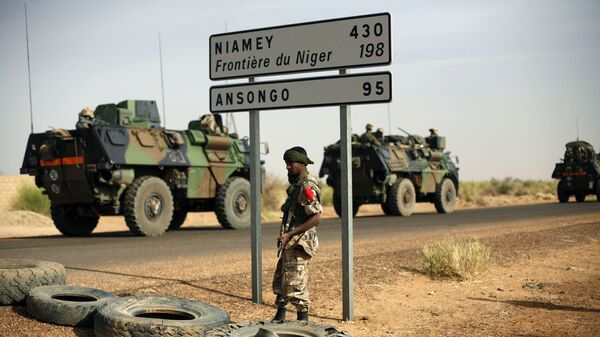 While Emmanuel Macron travelled to Mauritania last week to assure the Sahel countries of support in the fight against terrorism, the French contingent in Mali faces a serious threat: inter-ethnic confrontation. Sputnik spoke with Leslie Varenne, director of the Institute for Monitoring and Research of International and Strategic Relations.

Despite its good intentions, France has "made concessions" both to the separatists of Azawad in the north of Mali and to the authorities in Bamako, according to Leslie Varenne.

The current crisis in Mali is quite a complicated affair, made up of a mixture of fundamental protests from diverse ethnic groups.

According to Varenne, the fact that the French military did not allow the Malian soldiers regain the city of Kidal was painfully perceived by the government and residents of the southern part of the country.

"The Malian army, indeed, did conduct lawlessness against the population. In my opinion, this is a sufficient reason for the Malian army not to enter Kidal,” the director told Sputnik.

Attack on G5 HQ in Central Mali Kills at Least 6 Soldiers - Mayor
Kidal is a town and commune in the desert region of northern Mali. The town lies 285 km northeast of Gao and is the capital of the Kidal Cercle and the Kidal Region, with a population of about 25,000 people.

When the Malian army tried to take the city by force, it suffered a military fiasco. The director pointed out the role of the Malian elite, "who is playing its own game, and not necessarily with its French ally.”

"Questions arise about the strengthening of the inter-ethnic confrontation. I think that the authorities in Bamako are using this confrontation in their own interests.”

Varenne recalled a note that was published on her organization’s website. The note was written by a former Malian minister, Yehia Ag Mohamed Ali. In it, he wrote about how current Malian President Ibrahim Boubacar Keïta and Prime Minister Soumeylou Boubeye Maiga were two main figures of the Malian political scene after the overthrow of Moussa Traoré in 1991.

Canadian General: Mali Mission 'Far Messier' Than Standard Peacekeeping Missions
In his note, the former minister accused the president of Mali of initiating a campaign in the media to blacken the French army against the backdrop of preparations for the capture of Kidal city, the director said.

"He showed that what is happening today has already happened before and that these two people are using interethnic conflicts […] for domestic political purposes,” Varenne told Sputnik.

According to the director, a war cannot be won if there is no trust on the part of the population. “This is the problem that the forces of Operation Barkhane and the Group of Five are facing today. There are more and more voices in Mali and also in Niger, demanding the termination of Operation Barkhane.”

Operation Barkhane is an ongoing anti-insurgent operation in Africa's Sahel region that commenced on August 1, 2014. It consists of a 3,000-strong French force, which will be permanent and headquartered in N’Djamena, the capital of Chad.

For France, this situation results in the challenge to find funding for the activities of the Group of Five.

'Cynicism Does Remain': Pundit Suggests Macron Trying to Escape Colonial Ideas
According to the director, the secretary-general of the United Nations has proposed a draft resolution in which the UN can directly finance the group. The initiative received a veto from the US, which promised to bilaterally allocate 8 million euros. Another major sponsor is Saudi Arabia, which promised to allocate 100 million euros (as much as the EU).

"This means that the Group of Five will be funded by an Arab-Western coalition, as it was in Syria, Iran and Yemen, and we all know the consequences of that,” Varenne said.

While on a visit to the capital of Mauritania on the occasion of the 31st African Union summit, the French President Emmanuel Macron met with leaders of the Group of Five (G5) of the African Sahel, which includes Mali, Niger, Burkina Faso, Chad and Mauritania.

President Macron assured them of France's determination to eliminate the terrorist threat in these countries. The summit took place against the backdrop of two terrorist attacks in the center of Mali: on July 1, a suicide bomber attacked a French military patrol in Gao; the second attack, in Sevare, was directed against the Combined Forces Command Center of the Group of Five.

The views and opinions expressed by Leslie Varenne are those of the speaker and do not necessarily reflect those of Sputnik.