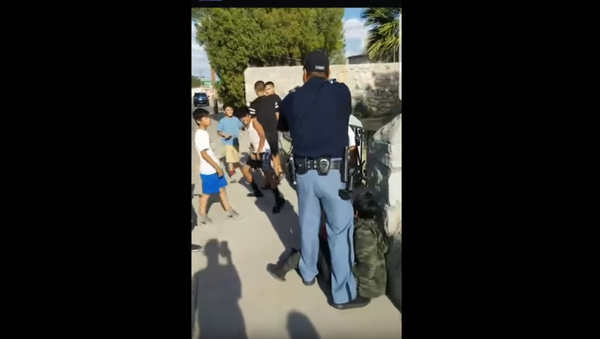 A disturbing video of an El Paso, Texas, police officer pointing his gun at a group of children has sparked outrage, resulting in the officer being placed on desk duty while the altercation is investigated.

The incident, which took place last Thursday, started when two police officers responded to a call about a group of at least six children trespassing near Seville Recreation Center in a neighborhood north of Ascarate Park in the western Texas city. It is unclear whether the children were attempting to trespass on recreation center property or at another location.

​The video, which was uploaded to Facebook by "Aj-king Stoner" on July 6 with the caption, "Hahahaha f*ck the cops" and has already been viewed almost 5 million times, first shows an unidentified police officer pushing one of the boys against a wall with his knee. When the other children taunt and curse at the officer, the officer whips out his gun and points it directly at the children, who swiftly recoil in fear.

Another officer is then seen dragging the boy who was pushed up against the wall across the street, while the others continue cursing at the officers. The first officer then pulls out his baton and warns the indignant witnesses to "get back."

The unidentified person recording the video can be heard saying, "We're going to put a report on these two fools. It's all good." He is then grabbed by the police officer, handcuffed and placed in the squad car with the other boy who was dragged across the street. He apparently handed the recording device to another person nearby, and the recording continues without a break.

A woman, the mother of one of the boys, can also be heard yelling curse words at the officers in the video. She is seen being pushed by one of the officers at one point in the recording.

During a Saturday news conference, El Paso Deputy City Manager Dionne L Mack and El Paso Police Department spokesperson Sgt. Enrique Carrillo announced that an adult and minor were arrested during the incident for allegedly interfering with the duties of a police officer. No injuries were reported. The names of the officers involved, as well as the two people who were arrested, have not been released. However, it was revealed that the officer who pointed his gun at the group of children has been on the El Paso police force for four years.

The incident is currently being investigated by the state's Internal Affairs Department, KVIA reported July 7.

"We have assigned additional resources to ensure the investigation can be completed expediently," Mack said during the Saturday news conference.

El Paso police officials have also declined to comment on the department's policies regarding officers drawing their handguns or batons during such incidents.

"The whole investigation process with Internal Affairs will determine whether the officer followed protocol, look at all of the related incidents that surrounded that, take an opportunity to (do) interviews," Mack said Saturday. "And go through that entire process, so all the facts and data are gathered before any conclusions are drawn."

"For me that it was most disheartening is to sort of see the children labeled and just sort of see them sort of discarded," Mack added. "I mean this is one incident, you know, these are our children, this is our community and I am not giving up on those children, and although we had this incident I am very proud to be a part of this community that I know values our children."

The video has generated controversy online, with some criticizing the gun-wielding officer's actions and others defending him based on the profanity used and "disrespect" shown to him by the children.

"Officer pulling a gun on unarmed children not because there is a threat but because he felt disrespected. Any worthless scum defending this behavior should never be allowed near a gun ever. Cowards," one user commented on a YouTube video of the incident shared on July 6.

"No respect… And these little hoodlums along with the parents want respect!… Blame the parents because they have no education whats so ever [sic]. Shameful in every way! If they were only educated enough to see how low they sound! At the police, you violated those kids rights. They have a right to record and say what they want. Shame on you for drawing your gun!﻿"

"Let's not politicize this. This is a non story. Cop did his job. Why don't we ask AJ King Stoner's mom, wanna be Cardi B why she was clucking out of her neck screaming the N word like 5 times? I'm a big supporter of you both. don't make this a big deal," a Twitter user commented.