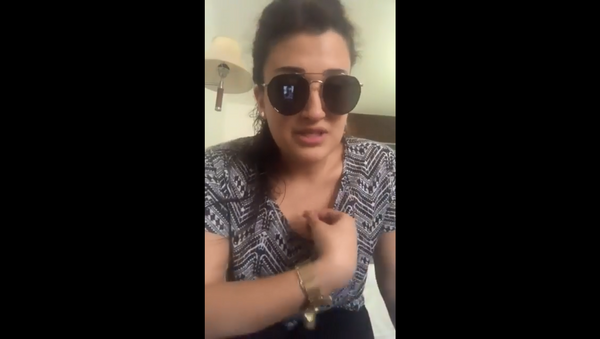 © Facebook / Mona Ali
Subscribe
A Lebanese woman was sentenced to eight years in prison in Egypt Saturday after posting a video on Facebook in which she criticized sexual harassment she experienced in the country. The court said she was spreading rumours harmful to Egyptian society.

Mona el-Mazboh, 24, was arrested in Cairo last month after taking to Facebook to complain about being sexually harassed by cab drivers and young men in the streets of the Egyptian capital. She called Egypt a "son of a b*tch country" and a dirty, lowly place. She said Egyptian men are pimps and Egyptian women are prostitutes.

She also complained of receiving poor restaurant service during the holy month of Ramadan and of having her money and belongings stolen during a previous visit to Egypt. She said in the video that she had been to the country several times in the past four years.

Her 10-minute video went viral on social media, prompting Egyptian women to respond in kind, defending their country and making similar statements about Lebanon in videos they posted.

One day prior to her arrest, Mazboh posted a second video apologizing to "respectable Egyptians" and saying that she didn't mean to attack the country as whole.

​She was arrested at Cairo airport during at the end of her visit.

She was initially sentenced to 11 years behind bars, but the ruling was amended to eight years. A judicial source said she was being punished for spreading false rumours that are harmful to society, public indecency, and attacking religion.

"Of course, God willing, the verdict will change. With all due respect to the judiciary, this is a severe ruling. It is in the context of the law, but the court was applying the maximum penalty," he said.

Kamal said that Mazboh had surgery in 2006 to remove a brain clot and has since had difficulty managing her anger, and that he'd submitted a medical report detailing the condition to the court. He added that she suffers from depression.

Egyptian activists say that President Abdel Fattah el-Sisi, who became head of state after participating in a military coup d'etat in July 2013 that removed from power Mohamed Morsi, the country's first democratically-elected president, has been cracking down on speech and political activity more than ever, according to Reuters.

000000
Popular comments
The message sent is NEVER go to Egypt.