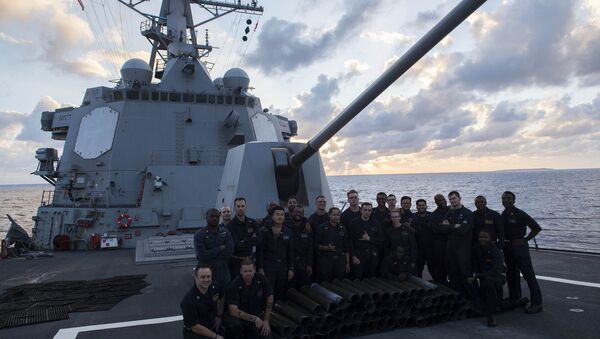 As the trade dispute between the US and China captures headlines, the states remain divided on other issues, including maritime navigation. A recent Chinese state media editorial accuses the US Navy of playing a “psychological game” by sending ships through the Taiwan Strait that divides China and Taiwan.

Sputnik reported July 7 that two US warships had passed through the Taiwan Strait that day, a decision likely to be regarded on the island as a sign of support from the US but that could lead to a further spike in tensions with China.

The US said that the trip had been planned in advance, Reuters reported, though it marked the first mission by US ships through the strait in more than a year and Military.com points out that both Washington and Taipei made "unusual public confirmations" of the transit over the weekend. The People's Republic of China sees Taiwan as a wayward Chinese province; self-governing Taiwan largely views itself as independent and current President Tsai Ing-wen has courted support for national sovereignty.

The US Navy sent the USS Mustin and the USS Benfold, two guided missile destroyers, on a route heading north through the 100-mile-wide waterway. "Since a vast stretch of the Taiwan Strait is considered an international waterway, Beijing cannot raise the issue if Washington's passage is uneventful," according to a July 8 op-ed in China's state-owned Global Times, which added that the US was "sending political signals by sending warships."

Washington "opted for sending destroyers instead of aircraft carriers at the weekend, no drills were conducted, and the US military hasn't officially announced the voyage," the outlet noted.

Ties between China and the US have soured in recent months in light of an ongoing trade dispute, with China recently imposing a 25 percent tax on $34 billion worth of US goods in response to a similar move by the US. US tariffs on Chinese imports are reported to apply to engines, motors, construction and farming machinery, electric transportation, along with telecom equipment and precision instruments. Tit-for-tat measures announced by China will reportedly hit US agricultural commodities, vehicles and aquatic products.