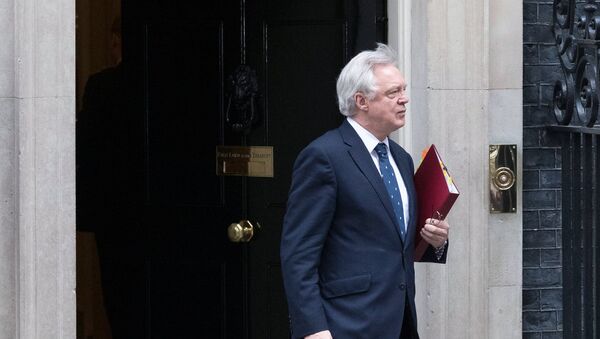 Former UK Brexit Secretary David Davis said Monday that he quit government service because the UK prime minister's policies were undermining Brexit negotiations with Brussels and that parliament would not truly regain power after the UK leaves the EU.

"The general direction of policy will leave us in — at best — a weak negotiating position, and possibly an inescapable one," Davis said in his resignation letter to Prime Minister Theresa May published by May's office. "In my view the inevitable consequence of the proposed policies will be to make the supposed control by Parliament illusory rather than real."

"I would like to thank you warmly for everything you have done over the past two years as Secretary of State to shape our departure from the EU," Theresa May said.

Peter Bone, a Brexiteer Conservative member of the UK Parliament, supported Davis' decision to resign and called this decision "principled and brave," The Independent reported.

"The PM’s proposals for a Brexit in name only are not acceptable," Peter Bone was quoted as saying by The Independent.

Shortly after the resignation of Davis, Steve Baker, another minister in UK Brexit department, resigned from government, The Telegraph reported.

BREAKING David Davis, Brexit secretary quits the Government along with No deal minister Steve Baker tonight. This is extraordinary.

Theresa May Vows to Sack FM Johnson if He Undermines Brexit Deal - Reports
According to Reuters, citing sources, after a meeting at Chequers, Theresa May "seemed to have persuaded" the most vocal Brexit campaigners in the government, including Davis, to back her proposal on "a free trade area for goods" with the EU. However, Davis reportedly expressed his unease over a compromise plan right up until the eve of the meeting, ultimately sending a letter to May describing her plans as "unworkable."

British media outlets reported earlier that Theresa May was aiming to get all cabinet ministers to back her Brexit strategy, however, if she failed to win over everyone's support, she was ready to fire her ministers.

The Times reported Friday, citing sources, that the UK Prime Minister had found replacements for a "select number of narcissistic, leadership-dominated cabinet ministers."

EU Remains Wary of Brexit Plan Despite May 'Going Through Hell' – Reports
Earlier in July, May said her cabinet had agreed a deal on the basis of UK’s ties with the European Union after Brexit. A white paper outlining their common stance is expected to be published this week.

Theresa May said that the the white paper would propose a EU-UK free trade zone for industrial and agricultural goods, as well as a common customs territory, putting the cabinet on a collision course with many hardline Brexiters among the ruling Conservatives. The UK government previously was inclined to establish a full-fledged customs union regime with the bloc without any exceptions and with the application of WTO tariffs.