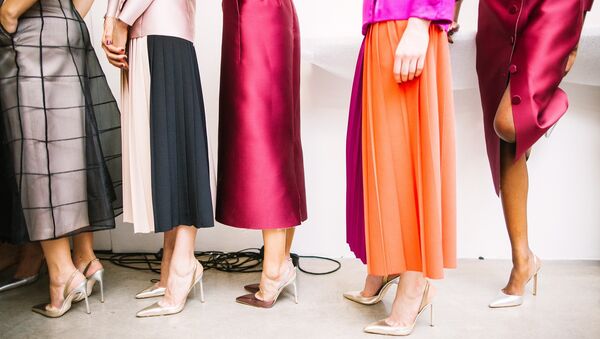 Luckily for ‘first daughter’ Ivanka, US clothing imports - including shoes - appear to be unaffected by her father’s willful trade war with China.

US President Donald Trump's daughter Ivanka has her own fashion line and all of her apparel and shoes are manufactured in China, of particular interest given that Washington just slapped China with an additional 25 percent duties on 818 items of Chinese imports calculated to be worth $34 billion.

On June 15, the Trump White House revealed that it would introduce an additional 25 percent of duties on 818 Chinese import items worth some $34 billion. In response, the Chinese State Council's commission on tariffs and customs vowed to retaliate by imposing tariffs on American agriculture products and automobiles.

Beijing and Trump have been involved in a major trade row, with the White House slamming China for "unfair trade practices."

Commenting on the White House decision, Beijing called on Washington to avoid the use of excessive protectionist trade measures, while the China Iron and Steel Association called the US import tariff policy "foolish."

In May, the Trump administration proposed tariffs on $50 billion worth of Chinese goods and China quickly vowed to implement its own retaliatory tariffs on US goods, including soybeans and aircraft.

However, clothing industries have been left untouched.

About one third of the clothing and 72 percent of the shoes sold in the US is made in China, according to the American Apparel and Footwear Association, Politico reported.

Chengdu Kameido Shoes in Sichuan, a southwestern Chinese province, told Politico that it is planning to continue supplying shoes for the Ivanka Trump brand.

"We are trying win a contract with one of our customers," a Kameido representative said. "The entire order is for the Ivanka brand," adding that his company was bidding to supply 140,000 pairs of shoes for the brand.

Another representative, from Hangzhou HS Fashion in Zhejiang province, told Politico that it is continuing to manufacture products for Ivanka Trump's brand through an intermediary commercial cabal called the G-III Apparel Group. There may, however, be some modifications to the brand's supply chain, an unidentified representative noted.

Chris Rogers, a research director at Panjiva, a global trade data company based in New York City, noted that it was possible that the brand's suppliers were changing.

"Before January 2017 all the [Ivanka Trump clothing and shoe] imports came from China, including Hong Kong. Since then there have been shipments from Indonesia, South Korea and Vietnam. If we see an increase in shipments from the latter in the coming months we will be able to say there has been a shift in the supply chain, rather than simply a change in reporting techniques," Rogers told Politico.

The Ivanka Trump brand has been under the spotlight after it was revealed that employees at a Chinese factory that manufacture apparel for Ivanka Trump's clothing business earn the equivalent of an appalling $62 weekly for a required 60 hours of work.

A labor group investigating the factory in October 2016 found a slew of issues, most notably that the operators of the factory subjected workers to inhumane conditions. The Fair Labor Association discovered the facility to be in violation of dozens of workers' rights standards enumerated by the United Nations International Labor Association.

Workers are given a pathetic five days of paid leave each year, according to the report. Their wages are less than half that of an average Chinese manufacturing employee, and do not reach even the level of minimum wage in most Chinese provinces.