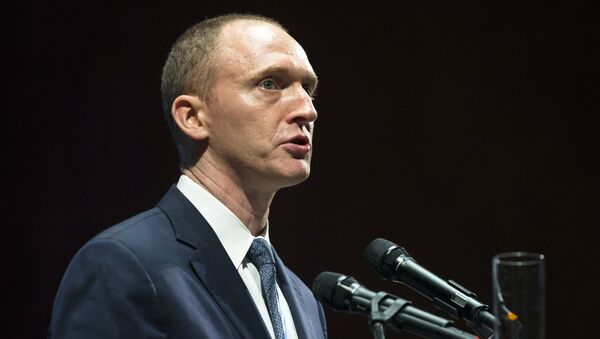 FBI agent Peter Strzok and former FBI lawyer Lisa Page became notorious after private correspondence between the two was released in which the former pledged to the latter to "stop" then-presidential candidate Donald Trump.

The question asked by investigators now is whether Strzok's personal preferences affected his official actions, according to The Hill.

According to new memos recently released by the FBI to the Department of Justice, Strzok and his counterintelligence team sought to speed up a search for "derogatory" information about Trump and his campaign just before the election.

A pivot for the recently made-public memos is Carter Page, an academic and energy consultant from New York. For a brief period, Page was a volunteer foreign policy adviser to Trump's campaign and visited Moscow the summer prior to the election.

No ‘Rank-and-File Guy’: FBI Agent in Anti-Trump Scandal Had Major Responsibility
In September 2016, some members in the US media began "leaking" info that FBI was investigating Page's travels. Lisa Page, according to testimony, reacted by writing then-FBI Director James Comey that the reports were a "completely false leak." Strzok, however, saw an opportunity and a "pretext" to interview Carter Page.

What started as the pretext quickly evolved into a Foreign Intelligence Surveillance Act (FISA) court warrant, which would have given the FBI authorization to monitor Carter Page. However, a warrant must be authorized by the DOJ, something that was not currently in the offing.

Needing the FISA document, Strzok and Lisa Page — in published emails — discussed talking points to convince then-FBI Deputy Director Andrew McCabe to persuade a high-ranking DOJ official to sign off on the warrant.

"At a minimum, that keeps the hurry the F up pressure on him," Strzok emailed Lisa Page on October 14, 2016, less than four weeks before election day, The Hill reported.

"Still an expedite?" another email said. "Any idea what time he can have it?"

"I know it's not going to matter because DOJ is going to take the time DOJ wants to take. I just don't want this waiting on us at all," the FBI agent pushed.

FBI Might Have Learned of Paul Manafort's Storage Locker from AP Reporters
The warrant was later signed and Page Carter was placed under surveillance for a year, but the FBI found no wrongdoing.

"Why counterintelligence agents who normally take a methodical approach to investigation felt so much pressure days before the election on this case," mused The Hill, adding, "Were they concerned about losing a chance to gather evidence at a critical moment? Or maybe, as some Republicans long have suspected, they wanted to impact the election?"

The day after Trump's astonishing victory, the two agents engaged into another mission, indicated by the following dialogue:

"We need ALL of their names to scrub, and we should give them ours for the same purpose," Strzok emailed Lisa Page on November 10, 2016, referring to an article about the resignation of Trump's campaign chief Paul Manafort over illegal dealings in Ukraine.

After Lisa Page replied that there were no new names to ‘scrub' from Andrew McCabe, Strzok came up with a proposal:

"I suggested we need to exchange our entire lists as we each have potential derogatory CI [confidential informants] info the other doesn't," he replied.

FBI Misconduct ‘Danger to What Little is Left of American Democracy’
The Hill noted that "The very day after Trump wins the presidency, some top FBI officials are involved in the sort of gum-shoeing normally reserved for field agents, and their goal is to find derogatory information about someone who had worked for the president-elect."

"Agents sought to create pressure to get "derogatory" information and a "pretext" to interview people close to a future president they didn't like," stated The Hill.

The article also stipulated that, without proper intelligence information from spies located in Moscow, the FBI had to build an investigation on "politically tainted media leaks."

"That means the dots between expressions of political bias and official actions just got a little more connected," observed The Hill.