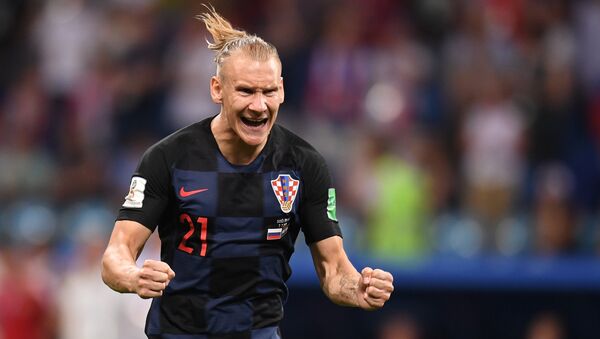 © Sputnik / Grigory Sysoev
/
Go to the photo bank
Subscribe
After an intense World Cup quarterfinal match between Croatia and Russia, which resulted in the latter’s defeat in a dramatic penalty shootout, Croatian defender Domagoj Vida filmed a short video, dedicating the victory to Ukraine.

The Croatian footballer, who scored the second goal in the 101st minute of the game, recorded a controversial nine-second clip, in which he shouts “Glory to Ukraine!” – a phrase that has gained notoriety as a slogan of anti-Russian Ukrainian nationalists during and after the 2014 coup in the country.

In the video, Vida, who used to play for Dynamo Kyiv from 2012 to 2018, was joined by former Croatia national team member Ognjen Vukojevic, who, in turn, said, “This victory is for Dynamo and for Ukraine!” and uploaded it to his Instagram.

The post was then deleted from Vukojevic’s page, but it was too late – it’d been shared on many other social media accounts.

Vida later told Sports.ru that he wasn’t trying to get political but that it was a “joke.”

“This victory is for Croatia. No politics. It’s a joke. I’ve got friends there [in Ukraine] since Dinamo Kyiv, I didn’t mean anything else. I don’t want to draw politics into sport. I love Russians, I love Ukrainians, I love Brazilians, I love everyone,” he said.

When asked if he was concerned that Russian fans might not understand the joke, he wondered, “Why wouldn’t they?”

After learning about the footage, FIFA launched a probe, which may lead to the Croatian defender being suspended for the rest of the tournament.

“FIFA is processing the different reports of the said match as well as potential evidence concerning the matter referred to. Please understand, until we have evaluated all information available, we cannot comment further.”

FIFA’s disciplinary code outlaws political slogans, whereas Section 54 states that “anyone who provokes the general public during a match will be suspended for two matches and sanctioned with a minimum fine of CHF 5000 ($5,050).”

Croatia’s hard-won victory against Russia on Saturday secured the squad a spot in the World Cup semifinals, where it will face off against England on July 11.

000000
Popular comments
he's an idiot, there is no glory for ukraine, there is no glory for ukrainians to strive for, it seems that the ukrainians who acted with honour lived and died in the GPW (obviously with some few veterans post GPW)
michael
8 July 2018, 10:13 GMT6
000000
The match was between Russia and Croatia. Shouting "glory to Ukraine" overshadows Croatia's success, and it is impolite not to see Russia's great organization and hospitality as well as the Russian team's fair play.