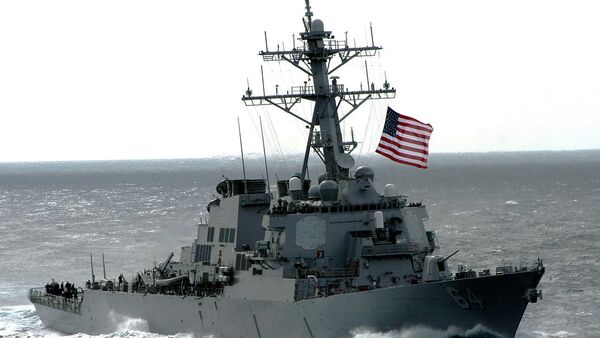 Two US warships passed through the Taiwan Strait on Saturday in a move that is likely to be regarded on the island as a sign of support by the US. Separately, the crossing may lead to a further spike in tensions with China.

According to Taiwan’s Defense Ministry, two vessels appeared on radar sailing to the northeast, essentially in line with formal regulations; however, the US military declined to comment on the matter.

US officials told Reuters the voyage had been planned but declined to specify the timing, with the operation being the first in the area by a US Navy ship in roughly a year.

The  1979 US-devised "One China" policy presupposes China’s sovereignty over the island, and is recognized by almost the entire world. Most recently, several major air carriers, including Singapore Airlines, Japan Airlines and Air Canada, have changed their description of Taiwan to "Chinese Taipei" on their websites.

Although it was the US that originally authored the policy, Washington maintains trade ties with the island and supplies arms. For instance, since President Trump took office, the US has approved the sale of $1.4 billion worth of arms to Taipei. In March, the US president signed new rules allowing senior officials to pay visits to Taiwan to meet their local counterparts and vice versa.

Ties between China and the US have soured considerably in past months in light of an ongoing trade war, with China imposing just the other day a 25 percent tax on $34 billion worth of US goods in response to the similar move by the White House. US tariffs on Chinese exports are reported to apply to engines, motors, construction and farming machinery, electric transportation, along with telecom equipment and precision instruments. Tit-for-tat measures announced by China will reportedly hit US agricultural commodities, vehicles and aquatic products.