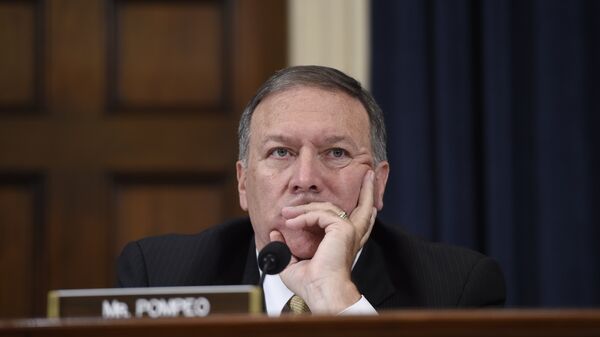 TOKYO (Sputnik) - US State Secretary Mike Pompeo expressed his desire to reach three main goals: North Korea's denuclearization, the guarantees of the country's political order and the return of the remains of the US soldiers killed during the Korean War (1950-1953), the Kyodo News agency reported.

North Korea's KCNA news agency said the outcome of talks with the US delegation headed by Mike Pompeo was "extremely troubling," blaming it for insisting on complete, verifiable and irreversible denuclearization.

According to the Kyodo News agency, these requirements have been announced to journalists who accompany Pompeo after his talks with the North Korean high-ranking officials during his trip to Pyongyang by US State Department spokeswoman Heather Nauert.

The news comes as the second day of negotiations is being held on July 7. Pompeo has already met with Kim Yong-chol, the vice chairman of North Korea's ruling Workers Party Central Committee. He may also meet North Korean leader Kim Jong-un later in the day.

According to media reports, along with denuclearization, guarantees of North Korea's political order and the issue of return of the remains of the US soldiers were also on agenda.

"We now have a meeting in Panmunjeom set up for July 12 — it could move by one day or two — where there will be discussions between the folks responsible for the repatriation of remains. It will take place at the border and the process will begin to develop over the days to follow," Pompeo told reporters after the meetings.

The US Secretary of State noted that there was a progress in the process of destruction of a North Korean missile engine testing facility.

"The North Koreans have also confirmed the missile engine testing facility, we talked about how the modalities will look like for the destruction of this facility. There is a progress [on the issue]," Pompeo told reporters.

Pompeo arrived in North Korea on July 6, which is his third trip to the country where he is discussing DPRK's complete denuclearization.

New Trump-Kim Meeting Rumored, Pompeo Leaving Soon for Third North Korea Visit
Friday's round of negotiations lasted for three hours. Following the bilateral talks, Pompeo wrote in a tweet that he was proud of his team's work, though he didn't any details on the content of what had been discussed during the consultations.

Earlier this year, the North Korean leader stated he was ready for denuclearization of the DPRK and signed a corresponding agreement with South Korean President Moon Jae-in at the inter-Korean summit in the truce village of Panmunjom in April.

In addition to this, the May summit between US President Donald Trump and Kim Jong-un resulted in the agreement to establish new bilateral relations, as well as the decision to join efforts to "build a lasting and stable peace regime on the Korean Peninsula." Pyongyang reaffirmed its commitment to the denuclearization of the Korean Peninsula, while the United States pledged to provide security guarantees.