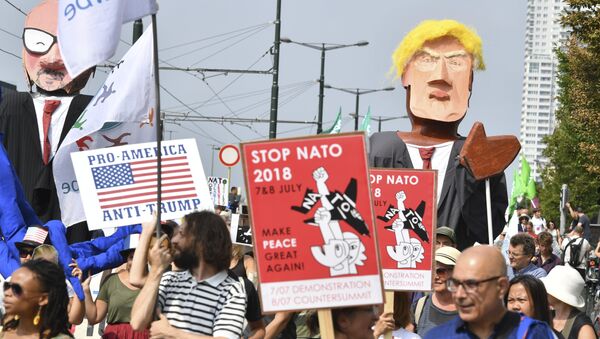 A week ahead of the NATO summit, peace activists have gathered to protest the increasing military spending, as well as the policies carried out by the alliance and the US president.

Activists have gathered in Belgium's capital to call for the dissolution of NATO and to protest US President Donald Trump's policies, including the imposition of tariffs that ignited a trade war.  The protesters moved towards the NATO headquarters in Brussels chanting "Trump not welcome," "stop NATO — stop war" and "make peace great again."

The organizers of the anti-NATO march stood against the increasing military spending by Belgium, including 15 billion euros on the newest F-35 jets. One of the activists announced from the stage, installed at the march's rally point, that they oppose "everything that Trump embodies" and that Trump's policy "is not leadership" and should not be an example for other politicians.

VIDEO: People in Brussels protest against US President Donald Trump and NATO ahead of summit pic.twitter.com/ymORoo8oB9

With thousands of others on the streets of Brussels today to say #TrumpNotWelcome. We refuse to normalise #Trump’s politics: he will be met with huge protests everywhere he sets foot in Europe this week. #Resist! pic.twitter.com/loovsEIEyQ

Trump will arrive in Brussels for a NATO summit, set to take place next week. It is expected that he will again raise the issue of spending within the military alliance. Previously, he repeatedly slammed the practice of European countries contributing only a minor portion of NATO's defense spending, while the US paid the bulk of it. Trump has demanded that every country in NATO start paying what it is required in accordance with the North Atlantic Treaty.