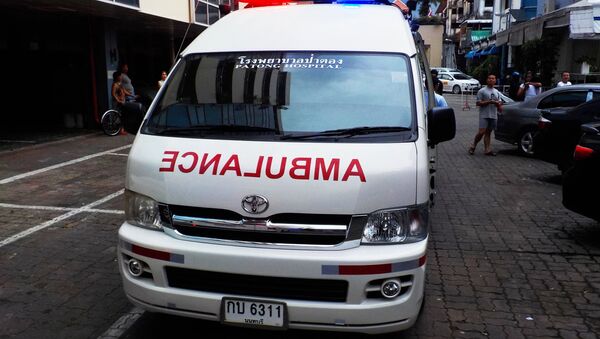 The 25-year-old coach of a youth football team, Ekkapol Chantawong, trapped inside a flooded cave system in Northern Thailand has offered his "apologies to the parents" of the children in a note released by the Thai Navy on Saturday, AFP reported.

According to AFP, it is the first message from Ekkapol Chantawong in a note given to a diver on Friday but published on the Thai Navy Seal Facebook page on Saturday, the only adult with children trapped inside a massive cave system.

"To all the parents, all the kids are still fine. I promise to take the very best care of the kids," Ekkapol Chantawong was quoted as saying by AFP. "Thank you for all the moral support and I apologise to the parents."

We're ready to go in: Dive team are all set for Thai cave rescue as rescuers ask for more time to build up the boys' strength. pic.twitter.com/coZ4Fd5C5x

Rescue Diver Dies at Cave Where Thai Children Being Trapped - Reports
The first message from Chantawong has reportedly split Thai social media. According to AFP, some netizens have lauded him after reports he gave his share of food to the kids. Others have criticised him for agreeing to take the children into the cave during the monsoon season.

On Friday, Thai Navy Seal Commander Rear Admiral Apakorn Yookongkaew said that a Thai Navy diver has died after falling unconscious from lack of oxygen in the cave where 12 boys and their football coach have been trapped for over two weeks.

The operation to rescue the football team ran into day 15 on Saturday. The team was discovered trapped in a flooded cave after leaving to explore the Tham Luang cave. Local media reported earlier that there were two ways of getting the children out; by diving through a six-kilometer (3.7 mile) long route or by lifting them through the cave's ceiling.

Expert Explains Why Thai Authorities Struggling to Rescue Trapped Thai Children
An option of drilling a shaft to get the children out through the cave's ceiling was reportedly ruled out due to technical considerations, so the rescuers are quickly teaching the children, many of whom do not know how to swim, to use diving equipment. The rescue plan stipulates that the children will wear the scuba gear and masks and be taken out by the rescuers on special stretchers, PBS TV said.

Authorities have reportedly admitted that the trapped children, aged 11 to 16, were running out of oxygen.

Several hours after the 12 boys and their coach entered the Tham Luang cave on June 23, heavy rainfall prevented them from leaving. Over 1,000 Thai military personnel, rescuers and volunteers from both Thailand and other states participated in the operation to find the group.

"Just teach the Thai boys to cave dive and get them out how hard can it be?"