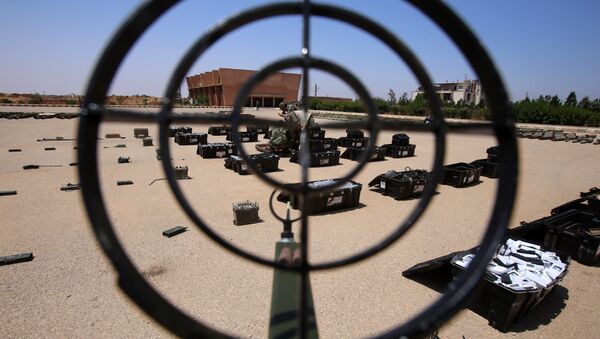 A ceasefire agreement and the return of Syrian refugees from Jordan's border have been negotiated with the leaders of armed groups in the Syrian province of Daraa, the Russian Reconciliation Center for Syria reported.

The Russian Reconciliation Center for Syria has announced that the leaders of armed groups in Syria's Daraa province had agreed to surrender weapons and halt hostilities.

"As a result of the talks, under the mediation of the Russian Center for Reconciliation with the leaders of armed groups in the province of Daraa an agreement on the following issues [has been reached]: the cessation of hostilities; the beginning of the delivery of heavy and medium weapons in all settlements under the control of armed groups," the center said in a report.

According to the Russian Defense Ministry, the parties have also agreed on the regularization of the militants' status, the evacuation of militants who do not wish to regularize their status, as well as their family members, to the province of Idlib, the resumption of work by Syrian government bodies on territories controlled by armed groups, and on the return of Syrian refugees from the border with Jordan to their homes.

On July 6, the Syrian Army reported that it had regained control over the Nasib crossing point on the Jordanian border as a result of an offensive.

The situation in war-torn Syria has intensified in recent weeks, with government troops responding to the militant shelling of the cities of Daraa and Suwayda by launching an offensive operation aimed at regaining control of the Syrian border with Jordan and ousting militants stationed there who've ignored a ceasefire reached with the help of the Russian Reconciliation Center for Syria.