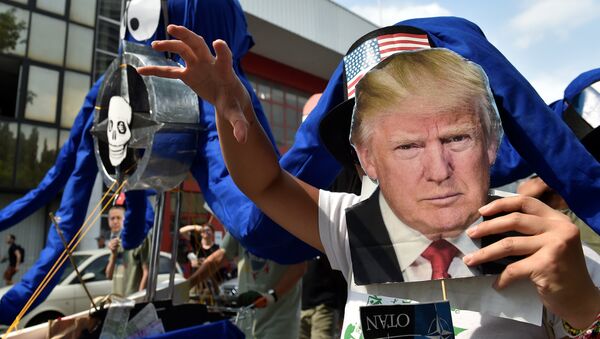 Denis Bolotsky
All materialsWrite to the author
Usually, it's one of the busiest railway hubs in Belgium, but on Saturday, Brussels North was also at the crossroads of the global peace movement, as hundreds of people gathered here to protest against Trump’s visit and the NATO summit.

Just a few days ahead of the big NATO meeting, hundreds of peace activists took to the streets of the EU capital to voice their concerns. Some of them don’t like the wars waged by the alliance, its continued expansion and the increased military spending, others came to protest against all forms of discrimination based on race, gender and religion.

Hundreds of people are protesting against NATO summit and Donald Trump's visit to Belgium. Slogans range from "Dump Trump" to "cut war spending, not education spending".Besides Belgians,there are activists from all over the EU, including ethnic Russians tired of anti-Russian bias pic.twitter.com/NvTLMspSxk

The majority of activists are from EU states. But instead of talking to leaders of their own countries, who will arrive in Brussels for a two-day North Atlantic Treaty Organization Summit, many of them decided to address one man – Donald Trump.

“We are here to show Trump that he’s not welcome here today for Belgian people, for the European people” – says a man named Kasper — “We should get rid of NATO. NATO is something from the past we don’t need. We don’t need military, we don’t need bombs to bomb Syria, Iraq, Afghanistan. We need more peace in the world.”

For many peace activists the situation in the Middle East is the main concern, and Syrian, as well as Iranian flags could be seen in the crowd. Doctor Nilufar Ashtari is a Belgium-based independent researcher and writer. She says that Iran’s nuclear deal shouldn’t be abandoned because that might lead to another war.

While America’s “sudden change of heart” on the Iranian issue is something relatively new, other things, such as NATO’s constant expansion, and “war games” near the alliance’s borders have been criticized by peace activists for many years.

In Norway, which will host the massive Trident Juncture NATO drills in October of 2018, the support for the alliance among locals is strong – says peace activist Harald Reppesgaard, who brought a “Ban NATO” banner to the rally. But, according to Reppesgaard, the majority of people in his home country are unaware of the true nature of NATO:

“As we entered NATO in 1949 it was a different organization, it was for our protection because of the Cold War. Now it’s something else – with the war Iraq and Afghanistan they are not protecting us, they are making war all over and we are a part of it.”

Some activists blame the Western mainstream media for the recent spike in anti-Russian moods in Europe. For the first time, the peace demonstration in Brussels was attended by a group of Russians who moved to Denmark, the Netherlands and other countries with their families decades ago, but have now grown tired of scaremongering.

Natalia Vorontsova traveled to the Belgian capital from Rotterdam, where she’s been living for 20 years. Along with other ethnic Russian Europeans, Vorontsova is protesting against NATO’s “flirting” with Ukraine, and the alliance’s eastward expansion. She says that the West should stop the confrontation with Moscow.

'Trump Not Welcome': Anti-NATO Protests Erupt in Brussels (PHOTO, VIDEO)
On Sunday peace activists will take part in a counter-summit in Brussels where they will discuss NATO, nuclear disarmament and military spending.

The annual meeting of the NATO Heads of State and Government will be held in the Belgian capital on July 11th-12th.