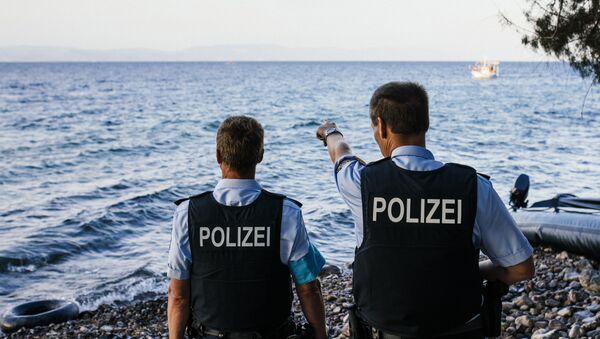 Reuters reported that the parties of Germany's ruling coalition have reached an agreement on migration. The parties have agreed to accelerate the process of returning asylum-seekers that were registered in other EU states. In addition, the report says that the new migration law could be submitted to the German government by the end of 2018.

Sputnik discussed this with Dr. Werner Patzelt, a leading specialist on right-wing movements and political science professor at the Technical University in Dresden.

Sputnik: What's your take on the measures Germany's ruling party is attempting to implement to counter migration?

Dr. Werner Patzelt: Kind of a compromise full of hope that it will work out well in practice, but it is only the beginning of the process in which German immigration politics moves away from hopes, goodwill and illusions towards realism in handling the migration issue. So we're not at the end of our decision-making process but only at the beginning of the decision-making process and at the end of illusions.

Sputnik: What is your assessment of what is lacking and what needs to be done to complete the agreement to resolve the issues?

The whole conception of the control-free Schengen space of Europe where you could travel without showing your passport was based on the assumption that there would be no illegal immigration into Europe, which has dramatically changed. As soon as both measures are effective, to a certain degree, say to a degree of 90%, the whole issue of migration then can be boiled down to the integration of those who are entitled to stay in the European countries and to bring out those people who have no right to stay in Europe, and most European countries have very severe deficits in the implementation of this policy. These are the four core elements and we've just begun to start with the implementation.

Sputnik: Now, of course, for the agreement to really work you'd have to have cooperation from Austria and Hungary and the leaders of both countries have already turned down Germany's proposal. Do you think they can reach a consensus?

Dr. Werner Patzelt: The cooperation with Hungary is effective because Hungary effectively is protecting Germany from a lot of immigration because they were the first to introduce border controls. The problem with our relationship with Hungary is that, officially, Germany does not acknowledge and is not grateful for this service rendered by Hungary to the rest of the EU by closing their frontier lines.

In the case of Austria, things are a bit different. What Austrians really do not want is that Germany prevents refugees who have made it to Austria to go to Germany and then Austria is left alone with them, as it was three years ago when the people from Budapest started to walk towards the border with Austria; but in practice this problem will be solved in the following way: if Germany refuses to accept immigrants that been registered in Italy or Slovenia or somewhere else, then Austria will impose border controls on its borders towards Italy and Slovenia, which can be quite easily done and which already has been trained [for] by police and military in Austria. So a chain reaction will follow, those refugees who have no possibility to enter Germany won't be given the possibility to enter Austria and, as a consequence, the Italian government has even better arguments to prevent boat people coming into Italy and the Greek government preventing refugees from coming to this country via Turkey; so it will be a chain reaction which is the strategic goal of this type of policy approach.

Sputnik: Merkel has already expressed hope that there will be bilateral deals with other EU states to speed up the return of migrants. What states do you think will be willing to cooperate with Germany?

Dr. Werner Patzelt: Well, it depends on what cooperation means. If cooperation means that refugees that have made it to Germany will be taken back by those countries, there are only limited chances for such agreements, because most European countries are happy that the migrants are going to Germany, because Germany is working as a big magnet of attractive  power in Europe, so Germany basically is the cause of the problem of migration, but an agreement would mean that Germany helps national governments in their effort to regain control over the borderline, then such an agreement will be appreciated, and it's, in fact, Germany who to the present time has resisted all suggestions to close the borderline within the Schengen space, which is the core elements of the migration problem in Europe.

Sputnik: Some people actually say that Germany's stance on the migration issue challenges the bloc's basic ideals. What would you say to people who have that point of view?

Dr. Werner Patzelt: It depends on what is defined as Europe's basic ideals. If the basic ideals would be to be an open continent for everybody who wants to settle down here - this never has been an ideal of European integration. If the ideal is to set up societies with good governments - then this is truly a European ideal, but you can't have good governments and well-established, well-settled societies with uncontrolled and unlimited immigration. So to speak, Europe's too adherent to theoretical and illusory ideals and has taken policy approaches which really run counter to what has been achieved in the past and should be achieved, according to European ideals. Therefore, construction based on an illusion is breaking down and those who try to defend it, defend it by referring to basic ideals which, however, can't be followed in practice if one does not want to destroy the whole European integrated building.

The views and opinions expressed by Dr. Werner Patzelt are those of the expert and do not necessarily reflect those of Sputnik.