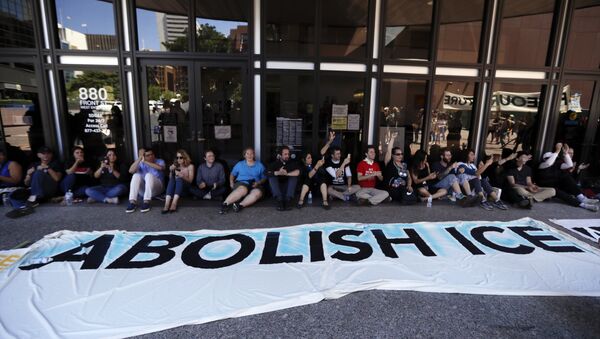 © AP Photo / Gregory Bull
Subscribe
Since the national outcry over US President Donald Trump’s “zero tolerance” policy that resulted in a massive increase of undocumented families becoming separated from each other, protesters around the country have been occupying space outside Immigration and Customs Enforcement (ICE) offices 24 hours a day.

Radio Sputnik's By Any Means Necessary was joined by Anlin Wang, an organizer with the Democratic Socialists of America who has been working on the ICE occupation in Philadelphia, and by Sputnik News Analyst Walter Smolarek, to talk about the destruction of the encampment outside the ICE building by Philadelphia police Thursday as well as the national movement against ICE.

After police raided the anti-ICE camp in Philadelphia, activists set up yet another camp nearby. "What people need to understand about the police sweep yesterday was that… the police lied to us every step of the way. From the very morning, [Department of Homeland Security] officials asked us to unblock the entrance. We did."

Later, Wang said, US officials increased their demands, ordering protesters to get completely off the sidewalk. "We did again," he told hosts Eugene Puryear and Sean Blackmon.

​He said that while protesters were attempting to leave the area, police started giving "conflicting orders." Amid the ensuing confusion, "all the sudden, police started bum-rushing us and destroying our equipment, dragging people away. Reports of beating people, the air was filled with screams of pain," Wang said.

"This action is not one which Philadelphia is doing alone. It is happening [within]… a national movement," Wang noted. Cities with major protests outside ICE properties include Los Angeles, San Francisco, Philadelphia, New York, Detroit, Portland, San Diego, Atlanta, Tacoma and more. Some have even forced the agency to halt operations."

"Our aim is to spread this sort of action across the country to make it abundantly clear that the fascistic-style actions of ICE are not to be acceptable under any circumstance and are to be resisted by any means necessary," Wang said.

Smolarek noted the significance of the push against ICE, commenting that "since Trump was elected there's been this debate about — what does resistance to the Trump administration mean?" In the first months after the election Smolarek noted, "we saw sort of grassroots people's resistance. You know, thousands and thousands of people taking to the streets on a regular basis."

However, "what we saw, I would say, since maybe April or May of 2017 was, the establishment of the Democratic Party was able to basically redirect that energy, or much of that energy, into basically the Mueller investigation — into these sort of conspiracy theories, or opposing Trump on the basis of his rudeness or perceived lack of patriotism," Smolarek noted, adding that the Democrats have been waging a war from the right of Trump on issues such as the denuclearization of the Korean Peninsula.

"What these ICE occupations, and also the mass demonstrations and rallies [against ICE] that have been happening for several weeks now… represents is a reemergence of the sort of grassroots people's opposition to the extreme, reactionary, racist, brutal policies of the Trump administration in a way that's outside of the control of mainstream establishment politicians," Smolarek observed.

000000
Popular comments
where's sideshow bob?
michael
7 July 2018, 06:34 GMT
000000
Grassroots? I am not so sure. I would be looking for money and colour revolution expertise from Uncle George just as it was reported he was donating to Antifa. While I imagine most American's are getting sick of being treated like crap by their government they are not yet awake or united enough to do anything about it. However, I don't believe most American's want mass immigration from the South.
Grumpy
9 July 2018, 02:06 GMT
000000
Newsfeed
0
New firstOld first
loader
LIVE
Заголовок открываемого материала
Access to the chat has been blocked for violating the rules . You will be able to participate again through:∞. If you do not agree with the blocking, please use the feedback form
The discussion is closed. You can participate in the discussion within 24 hours after the publication of the article.
To participate in the discussion
log in or register
loader
Chats
Заголовок открываемого материала
Worldwide
InternationalEnglishEnglishMundoEspañolSpanish
Europe
DeutschlandDeutschGermanFranceFrançaisFrenchΕλλάδαΕλληνικάGreekItaliaItalianoItalianČeská republikaČeštinaCzechPolskaPolskiPolishСрбиjаСрпскиSerbianLatvijaLatviešuLatvianLietuvaLietuviųLithuanianMoldovaMoldoveneascăMoldavianБеларусьБеларускiBelarusian
Transcaucasia
ԱրմենիաՀայերենArmenianАҧсныАҧсышәалаAbkhazХуссар ИрыстонИронауОssetianსაქართველოქართულიGeorgianAzərbaycanАzərbaycancaAzerbaijani
Middle East
Sputnik عربيArabicArabicTürkiyeTürkçeTurkishSputnik ایرانPersianPersianSputnik افغانستانDariDari
Central Asia
ҚазақстанҚазақ тіліKazakhКыргызстанКыргызчаKyrgyzOʻzbekistonЎзбекчаUzbekТоҷикистонТоҷикӣTajik
East & Southeast Asia
Việt NamTiếng ViệtVietnamese日本日本語Japanese中国中文Chinese
South America
BrasilPortuguêsPortuguese
NewsfeedBreaking
14:48 GMTUS Accuses China of 'Stonewalling' the World on COVID-19 Origins Since January 2020
14:27 GMTPsaki Bashed Online as She Tries to Laugh Off Question About Night Flights Transporting Migrant Kids
14:22 GMTParkland Shooter Nikolas Cruz Pleads Guilty in 2018 High School Rampage
14:06 GMTTension Erupts in India's Uttar Pradesh After Dalit Cleaner Dies in Police Custody
14:01 GMTGermany's Greens Party Chief Accuses Russia of 'Playing Poker' With Gas Prices
13:49 GMTBitcoin Hits New All-Time High, Soaring Above $65,000
13:45 GMT'Hunter's Moon' Reigns in Night Sky Over Tehran
13:44 GMTLondon Police Shut Down Tube Station After Stabbing Attack on Night Bus Leaves Three Injured
13:41 GMTLet's Go Brandon, F**k Joe Biden Song Reaches Top Spot on iTunes Hip-Hop Charts
13:36 GMT'Absolute Harassment': Celebs, Netizens Fume After Court Rejects Star Kid Aryan Khan's Bail Plea
13:33 GMTUS Military Base Bethesda on Lockdown Over Reports of Bomb, Active Shooter Threat
13:22 GMTFrench Feminist Group Sues Miss France Beauty Pageant for Allegedly Violating Country’s Laws
13:18 GMTSpain's La Palma Suffers Strongest Earthquake Since Volcanic Eruption
13:16 GMTTrump Organisation May Be Under New Criminal Probe Over Tax Schemes
13:12 GMTSuspect in Assassination Plot on Dutch Prime Minister Denies His Guilt, Lawyer Says
13:09 GMTUK Business Minister ‘Categorically’ Rules Out New COVID-19 Lockdown
13:07 GMTSpain Agrees to Extradite Venezuela's Former Chief Spy to US
13:00 GMTGerman Police Arrest Two Former Bundeswehr Soldiers Suspected of Forming Terrorist Group
13:00 GMTYalta 2.0? Why US Military Analysts Urge Biden to Avoid Standoff With Russia, China at All Costs
12:46 GMTTigray Forces Accuse Ethiopian Gov't of New Airstrikes in Mekelle