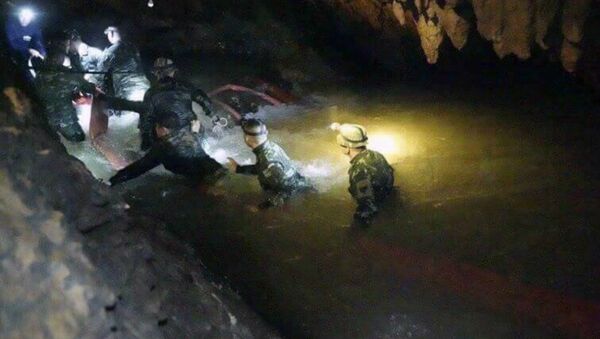 © AP Photo / Tham Luang Rescue Operation Center via AP)
Subscribe
Billionaire entrepreneur Elon Musk revealed Friday that engineers from his companies, SpaceX and The Boring Company, will be heading to Thailand Saturday to assist with the rescue of a Thai youth soccer team trapped inside a massive cave system.

After making the announcement, Musk noted that "there are probably many complexities that are hard to appreciate without being there in person."

The 47-year-old South African businessman outlined on Twitter a proposal to get the 12 children and their 25-year-old coach to safety, suggesting a tube or series of smaller tubes be inserted into the "cave network & inflate with air like a bouncy castle."

​After a fellow netizen shared a detailed map of the cave system that pinpointed where the group is stranded as well as the water trapping them there, Musk suggested that various air pumps and tubes would be needed.

​Musk was first called into the matter on Tuesday after a fellow Twitter user called on him to "assist in any way to get the 12 Thailand boys and their coach out of the cave." He responded the following day by saying, "I suspect that the Thai govt has this under control, but I'm happy to help if there is a way to do so."

​There are fears that breathable air in the cave may be running out. The New York Times reported Friday that the oxygen level in the team's part of the cave is at 15 percent and falling; below 16 percent and the possibility of hypoxia — and death — rises.

"You can survive, but you cannot walk around or do anything. It's like being in the high mountains," Dinko Novosel, the president of the European Cave Rescue Association, told the NYT in a phone interview. Thai officials, however, have said that since rescuers have established a pipe to bring oxygen supplies to the cave, air quality is no longer a worry.

According to journalist Jacob Goldberg, Narongsak Osottanakorn, governor of Thailand's Chiang Rai province, said on Friday that he'd invited Musk to join the effort through a friend of his that works with SpaceX.

​Osottanakorn has also stated that officials are preparing to initiate a rescue mission in the event that heavy rains arrive and start to raise the water levels inside the cave even more.

There are currently four different rescue operations that officials have been considering: pumping out the water so they can walk out, teaching the group how to scuba dive, drilling into the cave to pull them out and leaving them inside until the water recedes.

The team have been stuck inside northern Thailand's Tham Luang cave network for nearly two weeks. According to reports, the group had gone into the cave on a previous occasion and on June 23, after wrapping up a team practice, they decided to return and explore more of the underground chambers. The day's exploration came to a frightening end after heavy rainfall and rising water levels trapped them inside.

Though multiple countries, including the US, Australia, Japan, China, Myanmar and Laos all offered help in the search, it was two civilian divers from the British Cave Rescue Council that found the group on Monday, Vox reported. The boys and their coach are alive and unhurt, though suffering from a lack of food. If the group is forced to scuba swim out of the cave, officials have aired their concerns that they may not have enough strength for the difficult trip.

Saman Kunan, a 38-year-old volunteer and former Thai Navy Seal, has been the only death to occur in the rescue mission. Kunan died on Monday while delivering oxygen tanks to different locations along the 2.5-mile submerged route, Sputnik reported. The volunteer died after his own oxygen tank did not have enough to sustain him.

000000
Popular comments
he could send the engineers - if requested, without all of the self promotion.
michael
7 July 2018, 00:38 GMT
000000
He wants to help with the rescue of course, these are the guys that draw the maps for his driverless cars! Edit: Also, good luck to them finding a way out.