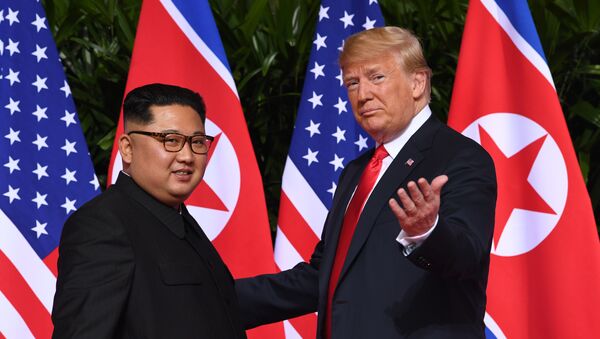 During heightened tensions between the US and North Korea in January 2018, Trump called the DPRK leader a "rocket man" hinting at his strong preoccupation with the country's missile program.

US Secretary of State Mike Pompeo has passed on Donald Trump's gift for the North Korean leader — a disc with Elton John's song "Rocket Man" along with a personal letter from the president, South Korean newspaper The Chosunilbo reported.

Trump reportedly recalled this song during the Singapore talks with Kim Jong-un, who, as it turned out, didn't know that it actually existed. The US president promised to send him a copy as a reminder of the days, when relations between the two countries were at their worst. It is unclear though what was written in the personal letter that accompanied the disk.

The news comes amid rumors that have surfaced on Japan's Kyodo News about the DPRK allegedly planning a meeting between Donald Trump and Kim Jong-un in Switzerland. According to media reports, Pyongyang has sent diplomats to Bern, Davos and Geneva to study various options for bilateral meeting between the two.

US President Donald Trump and his North Korean counterpart Kim Jong-un met at the Singapore summit in June. This was the first ever meeting between sitting leaders of the two countries. During the bilateral meeting, they discussed the denuclearization of the Korean Peninsula and security guaranties for the DPRK.

The talks were preceded by a period of severe back-and-forth between the US president and the North Korean leader with Trump even calling Kim Jong-un a "rocket man" for his focus on developing new missiles for nuclear warheads and constant threats of using them. The DPRK's leader recalled that episode during the Singapore talks and Trump noted that there is a song called "Rocket Man." Kim Jong-un was reportedly unaware of its existence and so Trump promised to send him a copy.