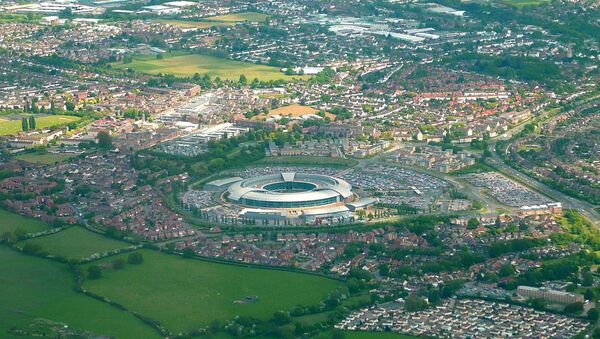 CC BY-SA 3.0 / Bthebest / GCHQ from just East of Cheltenham
Subscribe
A group of former Carillion employees working on Government Communications Headquarters (GCHQ) when the British construction giant collapsed at the start of 2018 have launched legal action over their mistreatment.

The legal action is being led by Unite, the UK's biggest trade union, on behalf of 27 members made redundant after Carillion went into compulsory liquidation January 15, and is the first yet undertaken for affected workers following the company's insolvency.

The group were were employed by Carillion subsidiary Planned Maintenance Engineering Limited, on a contract at GCHQ, the UK government's listening headquarters in Cheltenham, Gloucestershire. Eight days after going into compulsory liquidation, the company's 80-strong workforce was told by administrator PriceWaterhouseCoopers they faced redundancy — the workers were duly dismissed February 6 without consultation, and told to claim redundancy pay from the government. 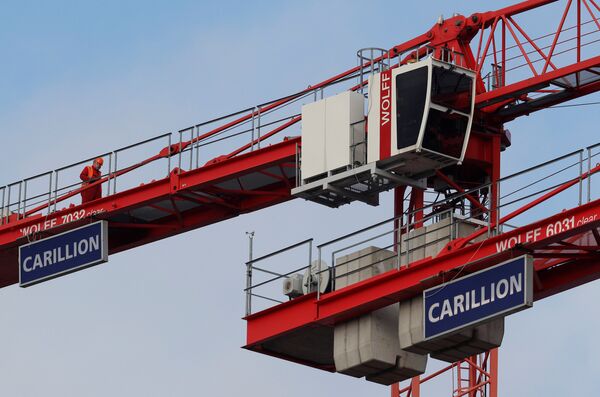 A worker walks along a crane on Carillion's Midland Metropolitan Hospital construction site in Smethwick, Britain January 29, 2018
© AP Photo / Darren Staples
The group's claims were then taken on by G4S, but as their section of Carillion was in compulsory liquidation, normal Transfer of Undertakings Protection of Employment regulations didn't apply, and their previous employment and terms and conditions were not protected. Unite Legal Services then lodged a legal claim on the group's behalf in June.

If successful, the workers could each be awarded up to 90 days' pay. It is uncertain whether Carillion/PWC will seek to defend the claim. Howard Beckett, Unite Assistant General Secretary for Legal Services said the union was "fulfilling its promise of using all avenues to defend our members, who are the innocent victims of Carillion's collapse."

"The complexity of this case, which combines employment law rights and draconian insolvency law requirements, demonstrates why workers need to be part of a union — it would have been simply impossible for individual workers to pursue such a case," he added.

Prior to its collapse, Carillion repeatedly found itself in court due to legal action brought by trade unionists. In particular, workers sought to bring the building firm to account for its unlawful use of 'blacklists' — secret databases naming construction industry workers who could cause trouble for their employers. Thousands of individuals ended up on these inventories without their knowledge, and were unable to find work as a result — the lives of many were ruined by inclusion, with some even committing suicide as a result of becoming persona non grata with their industry's biggest firms. 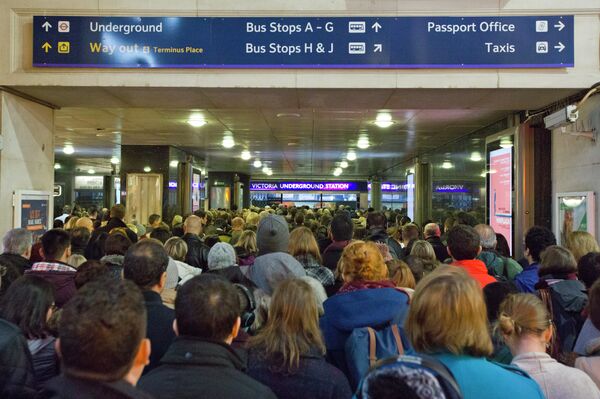 Commuter chaos as bus drivers strike in the UK
© AFP 2021
Perversely, these ostracized individuals had not done anything illegal — often, they ended up blacklisted for raising concerns about site safety, or other work and worker-related issues. Furthermore, in 2009 files seized from the offices of the Consulting Association, a firm that sold information on 'problematic' employees to major businesses, revealed some workers were placed under silent embargo for wearing anti-Nazi league badges, talking like a "young Alf Garnett" and being committed trade unionists.

However, Carillion was never successfully impeached for the practice, even in cases where the firm admitted in court to blacklisting particular individuals — the company employed most workers via employment agencies, and as such they weren't protected by UK employment law. To add insult to injury, Carillion frequently pursued blacklisted workers for legal costs following their failed actions. The closest the company came to facing justice was in 2016, when the firm admitted to the practice at the UK High Court, and paid out millions in an out of court settlement — nonetheless, not a single company director who'd engineered the wide-ranging criminal conspiracy was ever prosecuted for their actions.

On March 23, it was admitted by the Metropolitan Police that undercover police officers supplied information that appeared in the files of blacklisting victims, leaving the force open to charges of breach of privacy, defamation and breach of the Data Protection Act. The revelation was no surprise to campaigners — Peter Francis, a former undercover officer, admitted in 2015 he and his unit had spied on at least five trade unions, with gathered information likely being handed over to major businesses.

Moreover, undercover cop Mark Jenner — who operated under the pseudonym Mark Cassidy in activist groups 1995 — 2000 — infiltrated the Building Workers Group (BWG) and the Union of Construction, Allied Trades and Technicians (UCATT) during his deployment. His spying on the latter came at a sensitive time for the organization, as it was negotiating over a series of high profile construction projects, including the extension of the London Underground's Jubilee Line and the Millennium Dome.

When Jenner was recalled from undercover duty, he left a diary at the home he shared with 'Alison' — an activist he deceived into a long-term relationship — which demonstrate he monitored meetings of UCATT and other unions. He was also heavily involved with union activism, helping transport striking workers to picket sites and selling the BWG's newspaper. In particular, he is known to have played  a role in several high-profile labor struggles.

For instance, in late 1995 a major dispute erupted between comestible franchise JJ Fast Foods and its workers in in Tottenham, north London, which lasted four months. Striking employees sought to prevent deliveries of food reaching the various companies supplied by JJ Fast Foods, via flyposting, boycotts, pickets and leafleting campaigns. Involvement in these actions would've allowed Jenner to pass extremely sensitive information on strikers, and their actions, to police, and in turn JJ Fast Foods.

In 1997, Jenner was also elected Secretary of the Brian Higgins Defense Committee. Higgins was a well-known radical building worker and BWG Secretary. He was sued by UCATT official Dominic Hehir for libel after suggesting workers were not being properly defended by the union. Many of the individuals Jenner came into contact with during these activities ended up on the Consulting Association blacklist.