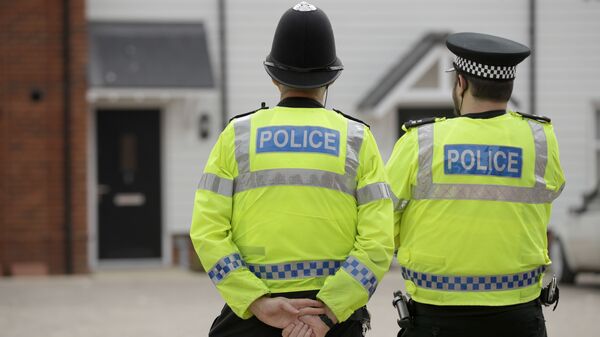 © AP Photo / Matt Dunham
Subscribe
International
India
Africa
MOSCOW (Sputnik) - Former UK intelligence officers told Sputnik that it was reckless for UK authorities to point at Russia as a link between the Amesbury poisoning incident and the nerve agent attack on Russia's ex-spy Sergei Skripal and his daughter in Salisbury in March, without any concrete proof of Russian involvement.

Late on July 4, the UK authorities said that the two victims of the Amesbury incident — who were hospitalized over the weekend — had been exposed to the same nerve agent as the Skripals.

UK Minister of State for Security Ben Wallace suggested that Russia "fill in the gaps" of what happened in the incident to allow the UK authorities to pursue their investigation and keep people safe. Wallace added that it was not a targeted attack but "a contamination by a Novichok."

Weaponizing Media: From 'The Russians Did It' to 'Rothschild Conspiracy'
At a parliament session later on June 5, UK Home Secretary Sajid Javid said that the United Kingdom would take "further action" should Russia's involvement in the incident confirmed. He noted, however, that "we don't want to jump to conclusions."

"Again [Wallace is] making connections when even in the Skripal case there had been no official connection made, only assertions of high probability that Russia was behind the Skripal attack. So to conflate that with the Amesbury attack I think is highly reckless for a public official," Annie Machon, a former MI5 intelligence officer, said.

Former MI6 intelligence officer Nicholas Anderson added that Wallace was unqualified to make any statements about the case.

"Please understand that many in the armed forces and intelligence services believe that Ben Wallace, even though he is a former officer in the British Army's Scots Guards, is not sufficiently experienced nor qualified to make official statements at this level. He has only been in place a few months and is a long-term ally of Boris Johnson, and toes the officially-set agenda," Anderson said.

Russia has repeatedly denied its involvement in the Skripal case and offered to assist the United Kingdom in its investigation.

Machon stated that it was misleading for Wallace to now ask for Russia's help with the Amesbury nerve agent attack when the United Kingdom had previously turned down Russia’s assistance.

"Certainly we also have a case where Sergey Lavrov, the Russian foreign minister, of course, has repeatedly asked to be shown the evidence around the Skripal case so Russia could contribute to the investigation at that time and they have been repeatedly rebuffed. So for [Wallace] now to say that Russia could now help in securing the safety of British people is disingenuous," Machon said.

UK Counter-Terrorism Police Join Probe Into Alleged Wiltshire Poisoning
Machon stated that since the Skripal case emerged in March, relations between Russia and the United Kingdom had been in a deep freeze, but the recent handling of the Amesbury case by UK authorities was likely only to worsen bilateral ties.

On June 4, the head of the UK Metropolitan Police’s anti-terrorism unit said the priority for the investigative team was to establish how contact with the nerve agent had been made, and that any baseless assumptions should be avoided.

Anderson stated that the UK authorities, by providing a lack of clarity about the attack, were only arousing suspicion among the population.

"It's early days yet as so much is unexplained as to what has happened in Amesbury. Many of this country's citizens before and now again are suspicious of our own government's motives. Events that occurred before were not properly explained to the public," Anderson said.

Anderson added that relations between Russia and the United Kingdom continued to be poor "at the choosing of the British government."

UK Police Allege Two Hitmen 'With Close Ties to Russia' Involved in Skripal Case
Wallace stated Thursday that although those affected by a nerve agent in Amesbury were not linked to the Skripals, the cause of the incident in Amesbury was nerve agent contamination.

Machon stressed that it would be wrong to draw such conclusions when at the time of the Skripal attack, experts held the belief that the A234 nerve agent could not remain effective in the open for a long time.

"But I think it was initially said that it would take months to investigate all these possible leads, all these possible theories and still not know what the outcome of what it was then. So for British ministers to be drawing analogies to the recent attack in the Skripal case, I think are dangerous," Machon said.

Salisbury to Host 2019 UK Army Day as Tribute to Skripal Case Response - May
Commenting on the possibility that the United Kingdom was unduly passing the blame onto a state actor, Anderson stated that London should focus on foreign criminal elements instead, that had long established profitable operation in the country and the existence of which continues to be officially denied by the country’s government.

Skripal and his daughter Yulia were found unconscious on March 4 in Salisbury, located several miles away from Amesbury. The United Kingdom promptly accused Russia of orchestrating the attack with what UK experts claimed was the Novichok nerve agent.

Moscow has repeatedly refuted all the allegations and offered its assistance in the investigation. The incident led to a diplomatic standoff between London and Moscow. Both Skripals have since been discharged from the hospital.