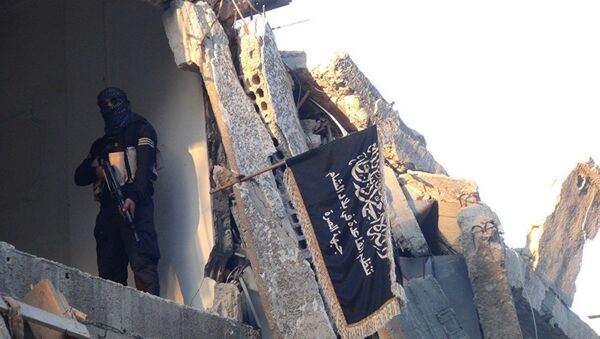 Terrorists have had no scruples about desecrating and robbing Syrian cemeteries, abusing dead bodies and selling corpses on the black market, Syrian Forensic Medicine General Director Zaher Hajo told Sputnik, stressing that these acts of vandalism come as a great shock to Syrians.

Graves of Syrian officials have been subjected to plundering in an apparent act of revenge against the Syrian government, with most such crimes being committed in terrorist-controlled territories in Idlib and Aleppo provinces.

"Every day we receive complaints from the population in the north of Syria about graves of some respected person or official being plundered," Zaher Hajo, the director of the Syrian Office of Forensic Medicine, told Sputnik Arabic.

The official underscored that for the most part, bodies are absent from the graves.

To illustrate his point, Hajo referred to a grave desecration case in Aleppo province.

"We received a complaint about a desecration of the grave of a respected politician in the province of Aleppo," he recalled. "He was known for his decency and high morality. This man died about 6 years ago. However, later the region where he lived and was buried in was captured by terrorists."

Hajo noted that when the region was liberated by the Syrian Arab Army (SAA), the official's relatives told the authorities that his tomb had been robbed and the remains of two persons were left in it. The forensic examination indicated that some of the remains belonged to the deceased official and the rest to a 19-year-old man. Hajo stressed that the official's body had been abused.

Tomb robbing always comes as a great shock to Syrians, who find it especially important to protect the peace of the deceased.

US Can Rarely Separate Terrorists and Opposition in Southern Syria - Lavrov
However, terrorists from former al-Qaeda affiliate al-Nusra Front*, Daesh (ISIS/ISIL)* and other extremist groups have repeatedly desecrated Syrian graves from the very outset of the seven year long civil war. Terrorists have vandalized Syrian cemeteries and destroyed them with bulldozers. It has also been recorded that extremists would usually bury their victims in mass graves.

In December 2017, the SANA news agency reported that a hundred bodies had been found in a mass grave in the vicinity of the city of Raqqa, citing a field leader.

It was reported on April 19, 2018 that Syrian government forces had discovered a mass grave containing 112 corpses in Douma, about 10 kilometers northeast of Damascus, after the region was liberated from jihadists.

The same month, about 50 bodies of civilians and Daesh terrorists were unearthed in Raqqa. The city authorities suggested that up to 200 bodies could be uncovered after further excavation.