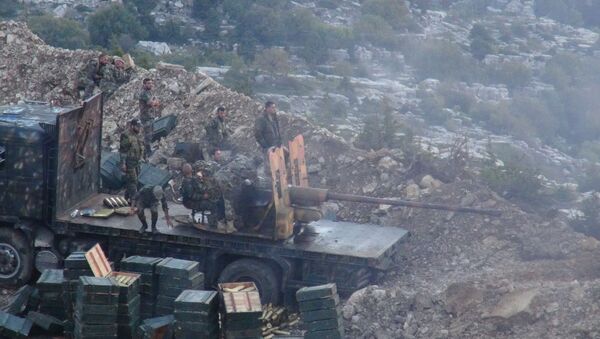 The Syrian army is currently engaged in flushing out the remaining jihadist militants holed up in the country’s western Latakia province.

Syrian forces have recently repelled a series of attacks by terrorist groups still active in areas near the country’s border with Turkey and along Latakia province’s border with neighboring Idlib.

A military source has told Sputnik that in the past few days the government forces had intensified their artillery bombardment of the militants’ positions, especially after al-Nusra fighters’ recent Grad missile strikes on Latakia.

Russian Defense Ministry Denies Attacks on Servicemen in Syria's Latakia
“One of the missiles fired by the militants landed on the roof of a residential building. Luckily, no one was hurt,” the source said.

He added that “the militants keep moving artillery systems around on trucks to avoid being hit by our return fire.”

The source, who was speaking on condition of anonymity, said that nighttime operations by government forces had proved highly effective against the “gun trucks.”

The video shows Syrian army soldiers preparing to strike the positions of the Islamic Movement of Eastern Turkestan near the village of Kabbani in the north of Latakia province near the Turkish border.

There are several terrorist groups active in Latakia province. One is the Islamic Movement of Eastern Turkestan and the other is the Turkistan Islamic Party in Syria.

Military operations are expected to continue until the Syrian army regains full control over the parts of the province still controlled by jihadists.