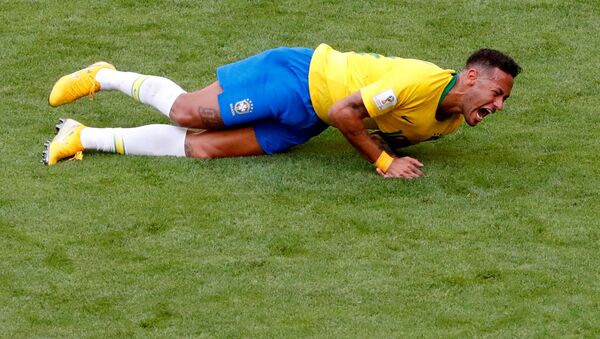 Social media users have been mocking the Brazilian football star after he fell on the ground and writhed in agony, pretending to have suffered some life-ending injury during his national squad’s matchup with Mexico at the 2018 World Cup earlier this week.

The World Cup isn’t over yet, but the Swiss broadcaster, RTS Sports, has already calculated the exact amount of time Neymar has spent diving and rolling on the pitch at the championship – 13 minutes and 50 seconds. Those calculations include five minutes and 30 seconds on the ground against Mexico when Miguel Layun clipped his ankle, and three minutes and 40 seconds against Switzerland.

And not for a single second has he felt actual pain

And not one yellow card for diving!

Neymar is fragile..please handle with care 🙄

According to the outlet, Neymar has been the most-fouled footballer in the tournament, having suffered 23 fouls in four games.

On July 2, Brazil made it to the championship’s quarterfinals, beating Mexico 2-0 and is set to take on Belgium on July 6.