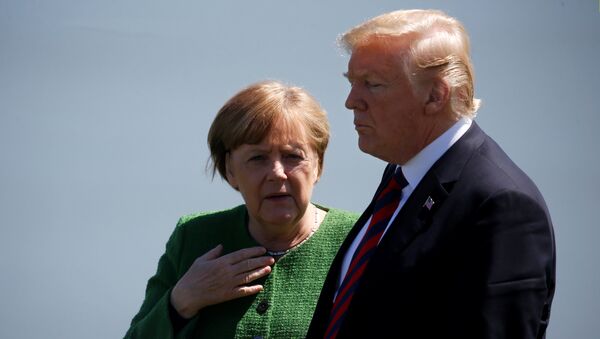 © REUTERS / Leah Millis/File Photo
Subscribe
International
India
Africa
The Trump administration earlier stated it was considering a 20-percent tariff on European car imports, which prompted the EU to threaten Washington with symmetric measures, likely to affect some $294 billion in US exports.

In light of the exchange, German Chancellor Angela Merkel has warned US President Donald Trump against launching a full-fledged trade war. Speaking in the German Bundestag, Merkel emphasized that both Brussels and Washington were locked in a “trade conflict” since Trump decided to impose steep tariffs on steel and aluminum imports.

“It is worthwhile to prevent this conflict from becoming a real war,” the chancellor said, adding that this is a two-way street.

Merkel further stated that she appreciated the efforts by EU and US negotiators to reach an agreement this month.

“The international financial crisis, which ensured that we now act under the framework of the (Group of 20), would never have been resolved so quickly, despite the pain, if we hadn't cooperated in a multilateral fashion, in the spirit of comradeship. This has to happen,” she said on Wednesday.

The statement came after Trump threatened to slap a 20-percent tariff on all vehicles assembled in the EU. In response, the European Union called those measures “unjustifiable and senseless” and warned Washington of a possible retaliatory move, which could affect up to $294 billion in US exports.

EU Ready to Discuss Lower Car Tariffs With US Amid Trade War Threats – Reports
Earlier, Brussels imposed tariffs on iconic US goods, such as Harley-Davidson motorcycles, jeans, whiskey, worth $3.3 billion in a tit-for-tat response to Trump’s decision to introduce 25-percent tariffs on steel imports and 10-percent duties on aluminum.

Transatlantic relations have dramatically deteriorated since the Trump administration declared a crusade against “unfair” trade, having accused his partners and allies of taking advantage of the US in the wake of the G-7 summit in Canada.