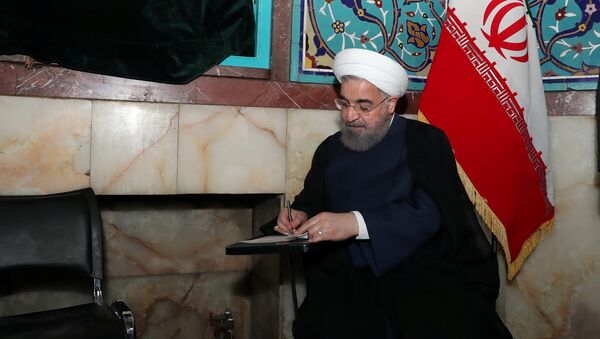 During talks with German Chancellor Angela Merkel, Iranian President Hassan Rouhani described as disappointing the package of proposals to preserve the Iran nuclear deal submitted by France, Britain and Germany, according to a statement posted on Rouhani's official website on Thursday.

"Unfortunately, the proposed package lacks a practical solution and a specific method for continuing cooperation and simply reiterates the general nature of the commitment, similar to what the European Union did in its statements earlier," Rouhani stressed, calling the proposals "disappointing."

However, Angela Merkel reaffirmed in phone talks with Iranian President Hassan Rouhani that Berlin does not intend to withdraw from the Iran nuclear deal and will continue work to preserve it, according to a statement posted on Rouhani's official website on Thursday.

The German leader noted that the package of proposals offered to Iran refers only to basic issues on the preservation of the deal, and it is necessary to conduct further dialogue to work out the details, the statement says.

"What's really important is that we are confident that we want to remain in the deal," Merkel said as cited by the document.

Moreover, Rouhani told French President Emmanuel Macron by telephone on Thursday that the EU's package of economic measures to offset the US pullout from the 2015 nuclear deal doesn't go far enough, according to Reuters.

Iranian FM: Washington Tries to Force Tehran's Withdrawal From JCPOA
"The package proposed by Europe … does not meet all our demands," Rouhani said.

However, Iranian President applauded his French counterpart for doing whatever it takes to rescue the historic nuclear deal after US pullout.

"Speaking with the President of France Emmanuel Macron on Thursday by telephone, Dr Hassan Rouhani described France’s attempts to keep the nuclear deal as positive," a statement on the website read.

The Iranian foreign minister is expected in Vienna on Friday for scheduled talks with top French, Russian, German, Chinese and UK diplomats on the future of the pact, which limited Tehran's nuclear research in return for sanctions relief.

Rouhani said he hoped the group would come up with a "clear operational program" on how to offset the fallout from the US withdrawal and its decision to reimpose sanctions on Iran.

On Wednesday, Rouhani said at a meeting with Austrian Chancellor Sebastian Kurz that his country would stay in the nuclear pact if the European Union upheld the commitments previously made by the United States.

"If the EU can fill in for US commitments made in the deal, Iran will stay in it," Rouhani said in Vienna, according to his website. "Currently, we are waiting for European countries’ package on how to save the deal."

Russia
Moscow Ready to Join EU Safeguard Measures Amid US Exit From JCPOA
The 2015 Joint Comprehensive Plan of Action between Iran and six world powers – the United States, United Kingdom, Russia, France, Germany and China – came under harsh criticism by US President Donald Trump during his 2016 election campaign. Trump ended US participation in the pact in May, announcing the phased return of sanctions on Tehran, most notably its oil sales.

However, Rouhani warned the US Wednesday that it had not thought about the consequences of attacking Iranian petroleum exports, saying the country would "firmly resist" any threat to its national interests.