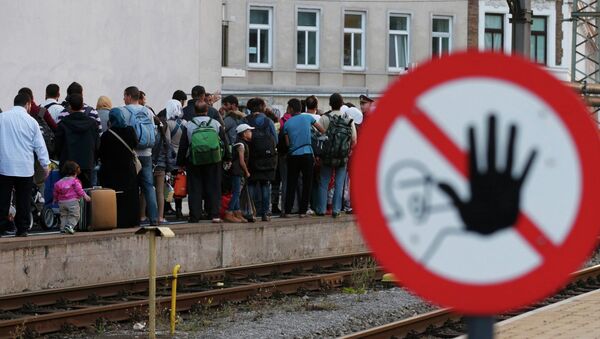 © REUTERS / Peter Bader
Subscribe
According to Reuters, the parties in Germany's ruling coalition have reached an agreement in a long dispute over a push by Bavarian conservatives to turn back certain migrants at the German-Austrian border.

Moreover, the parties reportedly agreed to accelerate the process of returning asylum-seekers that had already registered in other EU countries, under existing EU rules, but there would be no unilateral action by Germany, SPD leader Andrea Nahles said, cited by Reuters.

"An accelerated asylum procedure will be introduced for those who will register in the country or file an application. We proposed this point a few weeks ago, it is a good solution,"Andrea Nahles said.

In addition, Andrea Nahles told reporters on Thursday that a new migration law would be submitted to the German government by the end of 2018.

"The law on migration will be presented in the cabinet this year. It was also important for us," Nahles said after the talks with leaders of the Christian Social Union (CSU) and Christian Democratic Union of Germany (CDU).

Merkel-Seehofer Dispute Signals EU ‘Political Crisis’, Not Migration Problem
"There will be no national unilateral measures, there will be no unilateral refusal of entry at the border; there will be an accelerated order of proceedings at the border instead. There is no need to change the law for that… No camps will be set up in this regard, and the SPD was never prepared to discuss it in any case," she added.

In addition, leaders of the German coalition government parties agreed on an accelerated procedure for granting asylum in Germany to refugees who are on the country’s border with Austria, Nahles stressed.

On Thursday, Die Zeit reported that about 12,000 migrants have left Germany since February 2017 in exchange for receiving payments from the country’s government, according to the state-run program called StarthilfePlus.