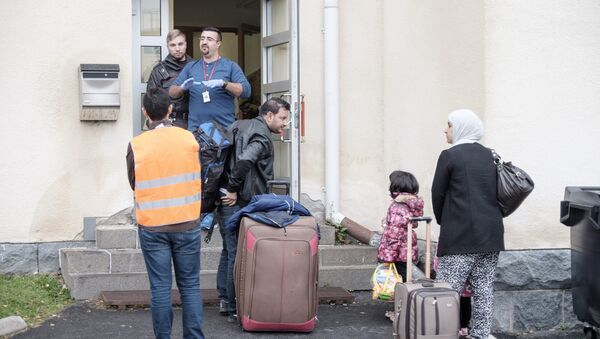 © AFP 2022 / PANU POHJOLA / LEHTIKUVA
Subscribe
At present, there are thousands of migrants whose asylum applications have been turned down. Many file new applications citing new grounds, such as religious conversion and homosexuality in an attempt to delay deportation.

Finland's Interior Ministry is pushing to change the legal system in order to stop migrants from re-applying multiple times, as is currently allowed under the law, national broadcaster Yle reported.

Today, rejected migrants often launch their asylum processes anew in a bid to delay imminent deportation, the Interior Ministry said. Interior Minister Kai Mykkänen has stressed that the opportunity to abuse the system in order to create delays should be limited.

Both the number of repeat applications and their percentage of overall applications have grown in recent years, as thousands of migrants have received negative asylum decisions and are trying to avoid being sent back to their respective homelands. More than half of the repeat applicants are Iraqis, who also constituted the largest share of migrants arriving in Finland during the peak of the migrant crisis.

Right now repeat applications are not being considered if they use the same rationale as the initial one. The proposed changes would make it easier for authorities to deport people from the country if their first application was dismissed.

According to the Interior Ministry, any re-application must cite a clear, valid reason for granting asylum.

"If someone has new grounds for asylum, they must be presented as early and comprehensively as possible," Interior Ministry senior specialist Kukka Krüger said.

Some of the most oft-cited reasons for re-application include conversion to Christianity and fear of persecution as apostate in one's respective home country. Another typical scenario includes individuals citing their homosexuality, which they somehow failed to mention in the original application, as grounds for the new filing.

According to Krüger, though, such applications will be considered in practice even if the legislative change goes ahead.

In 2017, Finland made positive decisions on 40 percent of all asylum applicants in 2017, up from only 27 percent in 2016. According to Finland's Migration Service (Migri), in 2016, mostly quick and easy applications were processed, in many of which the applicants clearly had no grounds for protection. Only in 2017 did Migri by its own admission move on to more challenging applications. The number of applications that Migri dealt with in 2016 totaled 28,000, falling to 9,400 in 2017.