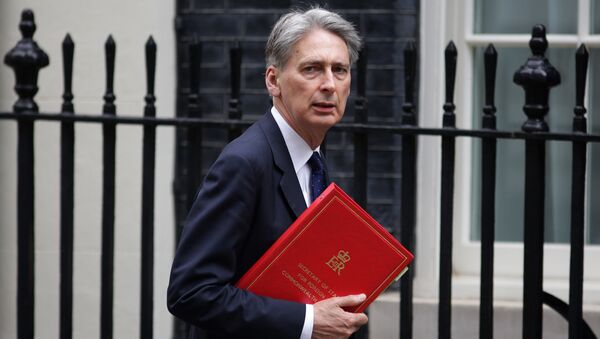 The UK's Chancellor of the Exchequer Philip Hammond says he plans to caution his Cabinet colleagues against backing a hard Brexit scenario, which would lead to the destruction of existing trade agreements with the EU.

In advance of Friday's Cabinet meeting at Chequers Court, the country house of the British Prime Minister, treasury chancellor Phillip Hammond has told MPs that he will present the treasury's assessment of the economic consequences of various Brexit scenarios.

"On Friday, as I have done consistently for the last two years, I will argue for a future relationship with the European Union that protects our important supply chains, protects British jobs and protects British business going forward," he said, according to The Irish Times.

"I will be setting out for my colleagues in the privacy of our cabinet meeting on Friday the Treasury's- indeed, cross-Whitehall's — economics group assessment of the implications of different potential routes forward," he added, underscoring that the advice provided in the review was relevant to government policy beyond the Exchequer.

Hammond's assessments are expected to mirror another cross-Whitehall study which said that a European Economic Area-style deal would knock 0.6% to 2.6% off GDP growth, while a free trade deal, such as the Canada-style agreement favored by Brexiters, would take a 5% to 10% toll.

Scholar Explains Why Brexit Impact Studies Will 'Cause More Divisions'
According to The Guardian, Hammond is expected to warn Brexit proponents that their plan will hit jobs, trade and growth.

However, the advocates of hard Brexit say Hammond's warning would be an attempt to resurrect a practice of scaremongering known in the UK as "project fear."

"It's clear that the meeting will be a total stitch-up with No 10 and Cabinet Office combining to try and bounce Brexit ministers with more failed predictions from project fear and rejected customs plans," The Guardian quotes a senior government Brexit proponent as saying.

Hammond's assessments come amid heightened tensions within the Conservative party, while Prime Minister Theresa May seeks to bring the cabinet towards a common approach on negotiations with the EU. Next week, the government is expected to publish a document which, as May promised, will outline the UK's position towards the Brexit deal "in greater detail than ever before," The Irish Times reports.

While Brexit proponents urge May not to compromise on her positions, the Prime Minister is reportedly expected to call for a significantly softer Brexit than she has previously signaled. As May seeks to stitch together her own government, she also urges the EU leaders to "show flexibility in considering her plan when it is published," The Guardian reads.