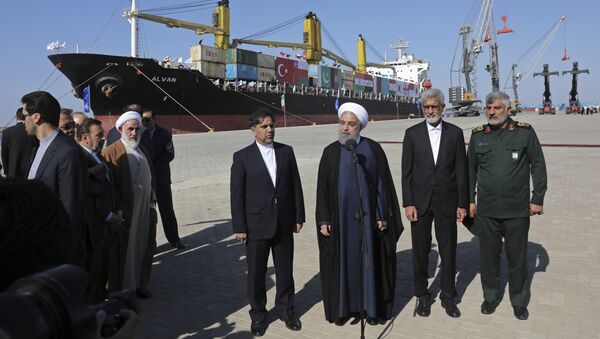 © AP Photo / Ebrahim Noroozi
Subscribe
International
India
Africa
Iranian President Hassan Rouhani said Wednesday at a meeting with Austrian Chancellor Sebastian Kurz his country would stay in the nuclear pact if the European Union upheld the commitments made by the United States.

"If EU can fill in for US commitments made in the deal, Iran will stay in it," Rouhani said in Vienna, as quoted on his official website, adding "Currently, we are waiting for European countries’ package on how to save the deal."

The 2015 deal between Iran and six world powers – the United States, the United Kingdom, Russia, France, Germany and China – came under harsh criticism by US President Donald Trump during his election campaign. Trump ended US participation in the pact last May, announcing phased return of sanctions on Tehran, most notably its oil sales.

Iran Still Awaits for EU Proposals on Preserving Nuclear Deal - Tehran
Rouhani also specified on Wednesday that Iran would stay in the deal if the remaining signatories to the JCPOA managed to ensure Iran’s interests after the US pullout from the agreement.

The Iranian president also stressed that the remaining signatories to the JCPOA had demonstrated firm political will on the issue, noting that the US withdrawal from the agreement was to the detriment to all the countries concerned and emphasized that the move would backfire on Washington itself.

In addition, Rouhani on Wednesday also warned the United States that it had not thought about the consequences of attacking Iranian petroleum exports, saying the country would "firmly resist" any threat to its national interests.