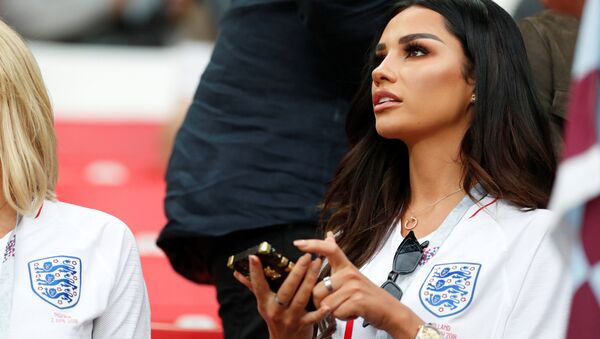 A glamorous 23-year-old model and girlfriend of an English football player cheered for him at a stadium during England’s first knockout game of the 2018 FIFA World Cup.

Despite appearing absent during the initial stages of the FIFA World Cup in Russia, Ruby Mae, the girlfriend of Team England midfielder Delle Alli showed up at Spartak Stadium in Moscow to cheer for her boyfriend and his teammates as they clashed with Colombia in a round of 16 match, The Daily Mail reports.

Mrs Alli and Vardy are in the building
Ruby Mae, Dele Alli's girlfriend, is at the Spartak Stadium along with Rebekah Vardy. pic.twitter.com/hZ7CUT8oao

​According to the newspaper, Mae showed her support by wearing the team’s jersey, and "put on an animated display as she watched the game from the stands."

The round of 16 match between England and Colombia was held in Moscow on July 3 and culminated in a dramatic penalty shootout, which paved the way for the Three Lions to secure a spot in the quarterfinals.