How England Fans Have Fun in Russia 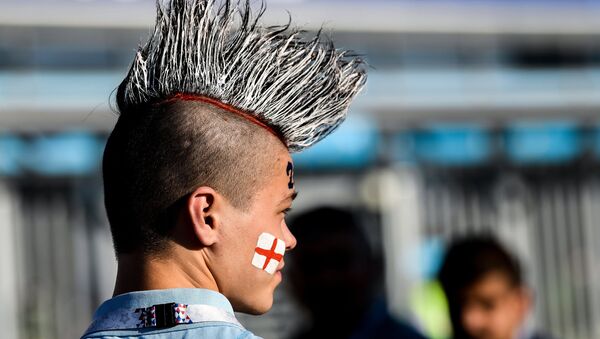 Ambassadors of the English fan movement to Russia, which is hosting the football World Cup, have been making headlines in recent weeks. From chanting songs about Auschwitz to vandalizing a cherished statue - England fans are paving their road to glory at Russia 2018.

Earlier on Tuesday, an English football fan was detained by police after scrawling "England" across the statue outside Spartak Stadium dedicated to Fyodor Cherenkov, one of the finest players in Spartak Moscow's history.

Later on, a video was published online, allegedly showing the detained fan who is seen wearing a shirt with the Three Lions badge on it and a Cross of St. George flag wrapped around his head. "I'm so sorry, I feel embarrassed," he said. "I respect the history, and had I known this would offend people I would never have done it, and I wholly apologize."

The act of vandalism came around two weeks after the internet was hit by a video showing English fans in a Volgograd bar, performing Nazi salutes and singing an anti-Semitic song with references to Hitler and Auschwitz. One of them was banned from attending football matches abroad for five years by a court in Leicester.

The Nazi-style bar party was a follow-up to an incident in which two British fans were taken off a train travelling to Volgograd. One of the men was detained after he had an argument with a police officer, and the other one cut his hand and was taken to hospital after he punched a window. Both were charged with minor hooliganism and public drunkenness.

Ahead of the World Cup, the UK Foreign Affairs Committee warned that "racist and/or homophobic intimidation, violence from hooligans and anti-British hostility" may put fans' safety at risk.  The statement came after the UK-Russia relations reached an unprecedented low following the Skripal poisoning and tit-for-tat expulsion of diplomats.