Scholar Explains Why Brexit Impact Studies Will 'Cause More Divisions' 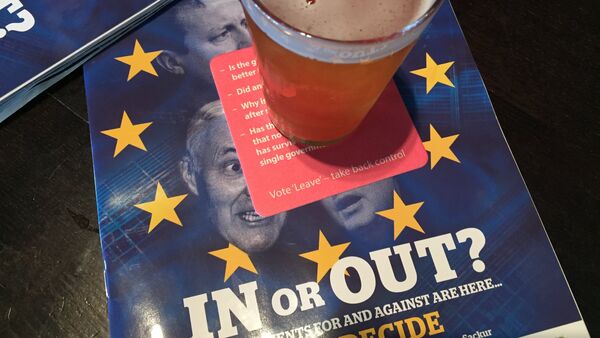 In letters released to the media, the UK Parliament's Treasury Select Committee asked Finance Minister Philip Hammond and Bank of England Governor Mark Carney to carry out studies on the long-term economic and fiscal impact of implementing the final divorce agreement.

It also called for an assessment of the impact of a no-deal scenario and a short-term economic overview of UK's future following Brexit. Sputnik discussed the timing of the requests for the Brexit impact analyses with Dr. Ben Williams, tutor in politics and political theory at the University of Salford.

Sputnik: Why is the assessment of Brexit impact being held ahead of a vote on the final divorce deal? What are British lawmakers hoping to achieve?

UK Lawmakers Order Economic Study to Figure Out 'Winners and Losers' of Brexit
Ben Williams: There’s a lot of uncertainty with the Brexit situation still. Depending on your perspective, some people optimistically see it as opportunity but some people are a bit more concerned, viewing it as a leap in the dark.

Basically, these assessments are looking to analyze the impact of leaving the single market and the customs union because there’re varying reports, there’re varying sources of information and the prognosis is still unclear, somewhat subjective and the British Parliament’s pretty split on the matter.

So these reports are really a request by the Treasury Select Committee to clarify the situation and try to give the British people and the British politicians some more information about the impact of Brexit when it happens.

Sputnik: How likely will the outcome of such a study drive a deeper wedge between the Brexiteers and Remainers?

Ben Williams: Highly likely. The problem with this situation is that Nickie Morgan, who’s asking for this report, she’s the chair of the committee, is a Remainer; Philip Hammond, who’s a chancellor is a Remainer, the governor of the Bank of England, Mark Carney, who’s involved in this process is also a Remainer.

So probably there’s suspicion amongst those in favor of Brexit that this is a kind of a plot by Remainers to maybe throw a metaphorical spanner in the works. As I said earlier, there’ve been a number of different reports; there’ve been a number of different predictions about what will happen when we leave the European Union. Some people think that there’s a fear put about by Remainers, clarifying that it’s going to be very bad, that there’re going to be problems; a lot of people are far more optimistic.

Brussels Believes There's 'No Hope' of Brexit Deal by October
Basically this is going to cause more arguments, more divisions, because within the British Parliament there’re different categories of MPs – there’re MPs who accept Brexit and want to go ahead, there’re soft-Brexiteers who want to keep the links with Europe as much as possible, there’re hard-Brexiteers who want to cut off all links as much as possible, and there’re actually some people who’re called Remainers who really want to revert the process and will prefer that Britain somehow remains in the EU despite the Referendum Vote 2016.

Sputnik: Senior government ministers are expected to meet on Friday to discuss Britain’s stance in talks with Brussels; what can we expect from this meeting?

Ben Williams: This is supposedly where the cabinet are going to meet and to sort of ultimately thrash out a position that they’re going to take when it comes to negotiating the final stages of the Brexit process. There’s a lot of uncertainty about what the governments are going to – I think  the phrase they’ve used: they don’t want to show their hand to the EU; so a lot of it is speculation.

What we should expect to see is Theresa May finally coming down in a position, in a definite stance, but the problem she’s got with that is whatever stance she takes she’s going to alienate a section of her own party.

John Bolton Held Secret Talks With Tory Brexit Supporters – Reports
So she’s either going to alienate the hardcore Brexiteers who want to cut all links completely or she’s going to alienate the soft-Brexiteers and the Remainers who want to keep links with the EU as much as possible. And the problem she’s got is either those groups could ultimately remove her from power because if it went to a vote in Parliament, a bloc of those MPs who were disenchant with their position could vote against what she’s proposing and she could lose the parliamentary vote.

That would probably make her position untenable; that would force her probably to leave office. We can then be faced with another general election, a new prime minister, and the situation could be chaotic as we build up to the departure days of March 2019. There’s a lot at stake here.

It’s a really tense period for the prime minister who’s got to get a position where she can keep her party and her cabinet on board as she closes this final phase of negotiations.

Sputnik: What’s your prognosis on the final divorce deal with the EU? How high are the chances that we might see a no-deal Brexit?

Ben Williams: There’s a phrase that’s being used by Theresa May and others – no deal is better than a bad deal – and that’s been highly debated. There’re some people who fundamentally disagree with that comment and say that no deal would be catastrophic and would have a devastating effect on the UK economy.

Theresa May Warned Her Leadership is at Stake Over Brexit Performance
The purpose of these assessment impacts that were mentioned earlier is to analyze what would happen if there was no deal, what would happen if there was a specific kind of deal. So this is the situation. The problem that the government’s got, which again is a cause of public concern, is initially the government said that the cost of leaving the EU, the divorce bill as it were, would be just under 40 billion pounds and more recent estimates suggest it would be over 50 billion pounds.

So the figure’s constantly rising and this of course is a cause of concern because we’re supposedly at a time of austerity in the UK, money is precious, we have to use it wisely and people are rightfully pointing out that 50 billion pounds is a lot of money.

And some people are questioning now whether Brexit is even going to be financially worth it, is the end result going to be a huge divorce bill and are we going to be. That’s the ultimate question and that’s where people differ in British politics at the moment. Some are saying it’s going to get worse if we don’t get a good deal, other people are saying we should still get an average deal or a poor deal, but we’ll still be better off because we won’t be paying that money every year in the long term.

So this is the situation, she’s in a very difficult position and it’s the cost of this divorce bill and the shape of the deal which is what she’s going to have to sell to her political party and the wider British public.

The views and opinions expressed in this article are those of Ben Williams and do not necessarily reflect Sputnik's position.