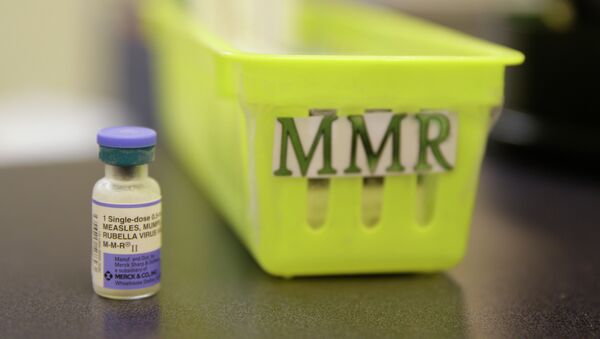 © AP Photo / Eric Risberg
Subscribe
Doctors in England are being asked to be on their guard against measles, a childhood disease which is highly contagious but preventable.

There were 274 cases of the the illness in 2017, however there have already been 738 cases this year, the majority of cases in London.

Public Health England has issued a request for young people to check they've received both doses of the MMR vaccine which protects against measles, mumps and rubella, "all of which can be very serious diseases and highly infectious," the warning from PHE states.

​The vaccination uptake dipped by 80 percent in 2003, leaving swathes of teenagers unprotected from the disease. "In the early 2000s there was a fall in MMR vaccination coverage in children and as a consequence, we are now seeing measles cases in young adults. Measles can be more serious in adults with a higher likelihood of hospitalization and complications arising." Dr. Mary Ramsay, head of immunisation at PHE said in a statement.

Measles was almost eliminated in the UK during the 1990s, however a report published in 1998 linking the MMR vaccine and autism, a claim now unfounded, led to a drop in the number of parents taking their children to be immunised.

Researcher Andrew Wakefield, a gastroenterologist made the claim. "The risk of this particular syndrome [autism] developing is related to the combined vaccine, the MMR, rather than the single vaccines," he said in a video.

According to website The History of Vaccines, Wakefield had filed for a patent for a single measles vaccine in 1997 "and so would seem to have a potential financial interest in promoting this view."

Meanwhile the British press jumped on the Wakefield paper. "Press outlets covered the news widely and frightened parents began to delay or completely refuse vaccination for their children, both in Britain and the United States. MMR vaccination rates in Britain plummeted."

At the height of the press interest over the "controversial MMR jab" former prime minister Tony Blair was asked live on British morning television if he and his wife Cherie Blair had followed the government's health policy and taken his son Leo for the triple injection.

In 2010, Andrew Wakefiled was struck off the medical register after the General Medical Council found him guilty of serious professional misconduct ruling he had acted "dishonestly and irresponsibly" in conducting his research, causing vaccination rates to plummet and cases of measles to rise. The panel heard Wakefield had paid children $7 for blood samples at his son's birthday party.

Speaking after the hearing, Professor Terence Stephenson, president of the Royal College of Paediatrics and Child Health, said the scare over the vaccine had done "untold damage to the UK vaccination program."

Cases of measles continues to rise in countries across Europe, the majority of them in Romania, followed by France, Greece and Italy; 25 people have died, according to the European Center for Disease Prevention and Control.

New @WHO graphic highlighting the 2018 #measles epidemic in #Europe, due to low #vaccine coverage and antivaccine activities #VaccinesWork https://t.co/kdoJFTxdzt pic.twitter.com/kck0v36nws

​The vaccination uptake among babies and toddlers remains "very high" however its teenagers who are more at risk, especially if travelling abroad to Europe for a summer festival, "environments of close mixing," PHE states.

As #measles cases rise, we share some practical advice for parents https://t.co/Ob9fwxrH9Z