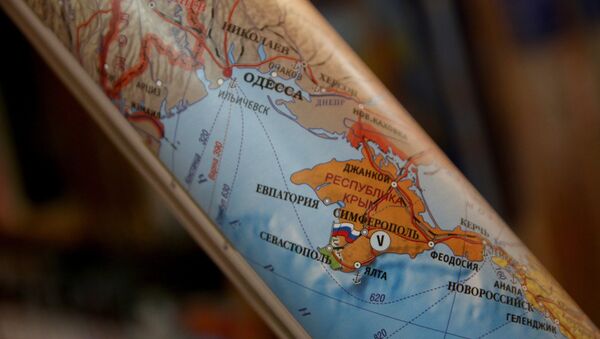 White House spokesperson Sarah Huckabee Sanders has said Monday that the two superpowers have “agreed to disagree” on the issue of Crimea’s 2014 independence referendum and subsequent request to join the Russian Federation. She didn’t rule out the impossibility of changing the status quo, though.

"We do not recognize Russia's attempt to annex Crimea," Sanders said during a briefing with reporters Monday. "We agree to disagree with Russia on that front and our Crimea sanctions against Russia will remain in place until Russia returns the peninsula to Ukraine," she added.

The White House press secretary's comments come ahead of the summit between US President Donald Trump and Russian President Vladimir Putin scheduled to take place July 16 in Helsinki, Finland.

As Sputnik's Ivan Danilov noted earlier, the upcoming summit sparked fears about the two leaders finding a common tongue, with some speculating that Trump might recognize Crimea's 2014 referendum of independence and subsequent request to join Russian territory, which many in the mainstream media call an "annexation." According to the Hill, Sanders apparently aimed to quell these fears during the briefing.

Globalists Are in Panic Mode Because of 'Putin-Trump Summit'
However the White House website notes that this disagreement is not set in stone.

Fears that POTUS may recognize Crimean self-determination were sparked by the US president himself, who told reporters last Friday that "we're going to have to see."

Bolton underscored, however, that the acceptability of changing borders with military force is "not the position of the United States."

Earlier on Monday, Kremlin spokesperson Dmitry Peskov ruled out the possibility of negotiations on Crimea.

The status of the peninsula "can not and will never be on the agenda because it is an inseparable part of Russia," he said.

While the Republic of Crimea is indeed one of the shortest-lived independent countries, it is neither alone, nor the shortest-lived nation in history. The Republic of Benin, Republic of Puerto Rico and Carpatho-Ukraine existed for less than 24 hours at various points in history. The Russian Democratic Federative Republic existed for a mere 13 hours in 1918, being subsequently replaced by the Russian Soviet Federative Socialist Republic, which existed as a sovereign state for 5 years and later became the largest republic of the Soviet Union.