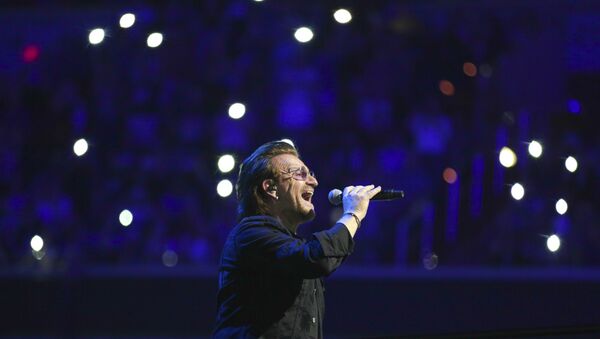 © AP Photo / Brent N. Clarke
Subscribe
The rock star, well-known for his political activism and philanthropy, gave the dire warning at a New York event which brought together an impressive number of UN diplomats.

Irish rock star Bono gave a speech at a U2 concert at Madison Square Garden in New York, which saw several hundred UN diplomats and staff in New York jump up and down to the band's hits. The event constituted part of Ireland's push to win a seat on the UN Security Council in 2021-22.

With or Without EU?

He warned that the United Nations and other international organizations, including the EU and NATO, are threatened. Bono called on the international community to team up to ensure they continue to exist.

"… let's be honest, we live in a time when institutions as vital to human progress as the United Nations are under attack."

Where the Threats Have no Name

Although Bono did not specify which countries were posing what he called a threat to international institutions, his speech appeared to be clearly aimed at US President Trump.

POTUS has doubled downed his criticism of the European Union amid an ongoing trade spat with Washington's transatlantic allies, sparked by the US' unilateral move to hit Europe with steel and aluminum tariffs.

Trump has also been criticizing his NATO allies, urging them to beef up defense spending.

The Trump administration has also pulled the United States out of the Paris climate accord, claiming that the deal was undermining the national economy.

On Monday, the US president issued a vague threat to the World Trade Organization, warning that "we'll be doing something" if the WTO doesn't change what he called its "bad treatment" of the US.

Bono is the co-founder of and spokesman for the ONE campaign, and international anti-poverty NGO. He has been a vocal critic of Donald Trump's agenda, blasting recent family separations at the US border, part of Trump's crackdown on immigrants, as the most "un-American thing."